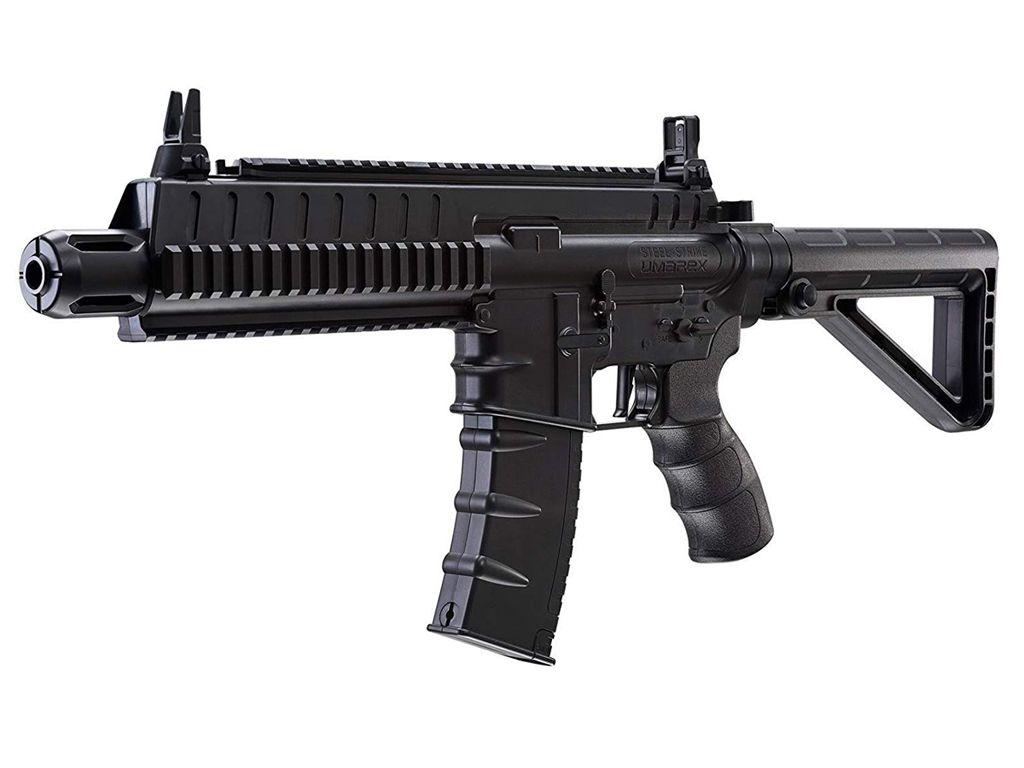 Trigger Pull: Single action only, so you will need to charge the rifle by pulling back the charging handle first. Once this is done, the trigger is reset and the gun is ready to shoot. The blowback operation charges the internal bolt automatically after each shot so keep this in mind as the gun is going to be live and ready to shoot until you either run out of ammo or CO2. Make sure to place it in safety mode when not in use, especially when you have CO2 in the gun.

Accuracy: First shot out of the Umarex Steel Strike BB Rifle was below 200 FPS. I think this is because the duel CO2 system needs a least a couple of shots to get primed up because the gun only seemed to get better with each shot, the opposite of what happens with most CO2 airguns. After several shots, the Steel Strike Rifle settled into a nice 390 FPS range and the temperature was only 18° Celsius or 64° Fahrenheit. In warmer conditions I would expect to get at least the 400 FPS claimed by Umarex. Moving onto the accuracy portion, I was very pleased with the results. Placing 10 semi-auto shots 30 feet down range into my paper target using a rested sitting position, I was able to get just under a 1 inch grouping. This was using the built-in flip-up non-adjustable peep sights which I do find a bit hard to use with my aging eyes. The BB rifle shot well-centered, just a little bit low and slightly to the left but very close to the bullseye. When I flipped the selector switch to 6 round burst, things did spread out a bit but this was mainly because of the vibration that caused me to pull the gun to the right with each 6 round burst.

Build Quality: The Umarex Steel Strike BB Rifle is mostly plastic on the outside with most of its metal parts on the inside. Pretty much everything you can see on the outside is going to be plastic except for the magazine release and selector switch. The plastic seems durable enough but it has just a bit too much shine for me, which I think makes it look less like metal and more like plastic. Everything seemed to function as expected but I would have liked to see more metal. Not necessarily the outer shell, but the flash hider, trigger, flip-up sights, and charging handle could've been made out of metal and would have given this BB rifle more weight and balance to it.

Realism: The Steel Strike is designed on the AR platform and is about the right size, shape, and look of an AR15/M16 type rifle. Even the selector switch, magazine release, rear adjustable stock, and charging handle function just like a real AR 15! Some parts are molded in just for looks like the bolt release, dust cover, and forward assist but at least they look the part. The plastic was the real tell here as it kind of looks like plastic whereas some plastic guns are really hard to tell they are not metal, but other than that this is a pretty decent replica of an AR rifle.

Comments: The Umarex Steel Strike BB CO2 .177 Caliber Rifle looks to be an improvement over the Steel Storm and Steel Force. I like the new placement of the duel CO2 into the buffer tube and changing the location of the BBs from the upper receiver to the drop-out magazine. We also get a magazine hopper capacity of up to 900 rounds with the Steel Strike, so no having to refill it for several CO2 swap-outs. I think the overall looks have improved, and the tighter aperture of the peep sight makes getting BBs on target with more accuracy a bit easier. At the end of the day, the Umarex Steel Strike is a really fun CO2 blowback "full-auto" BB rifle that has a crazy 6 round burst rate of fire and shoots pretty hard with good accuracy. You get all of this at a pretty affordable price. Are there other full-auto capable BB rifles that look a little bit better than the Steel Strike? I’m thinking about the Crosman DPMS SBR... Sure, but in terms of performance the Umarex Steel Strike BB Rifle isn't lacking anything in this department. It may depend on your budget and if you’re simply just looking for a fun full-auto CO2 BB rifle.

Average Rating
Based on 3 rating(s)

Impressive For The Price!

I did quite a bit of comparative online research before purchasing my Steel Strike, and overall am very satisfied. It is easy to handle and shoot and the 900-round magazine capacity is a definite plus! A previous reviewer noted that they couldn't get both CO2 cylinders to puncture after numerous attempts...I had the same problem initially, but discovered the screw-in cap for the CO2 tube needs to be FULLY seated; that is, screw the cap in until it absolutely won't turn anymore (good thing the cap and tube are metal; plastic wouldn't hold up) and the ridge on the cap above the threads is fully butted against the end of the tube. Then both CO2 cylinders will be punctured. While I agree there is a LOT of plastic, that doesn't detract from the rifle's operation, and because I'm using a laser sight the non-adjustable sights are not an issue. All in all, this is an unbeatable BB rifle for the price/1
Was this review helpful to you?  0  0
Money Value
Apr 22, 2019

Fast service, package arrived 3 days early. Tons of fun for plinking around. Not a target gun but spraying bbs everywhere is a blast.
Was this review helpful to you?  0  0
Quality
Accuracy
Money Value
Feb 03, 2019

Build is ok. It is super fast gun but sometimes magazine doesn't work properly and also we loaded two co2 in the co2 tube but it punctures only one. We have tried many times but same results, it punctures one co2 and does not touch the 2nd one. It shoots about 70 good rounds in one co2 cartridge.
Was this review helpful to you?  0  0
How are we doing? Give us feedback about this page.