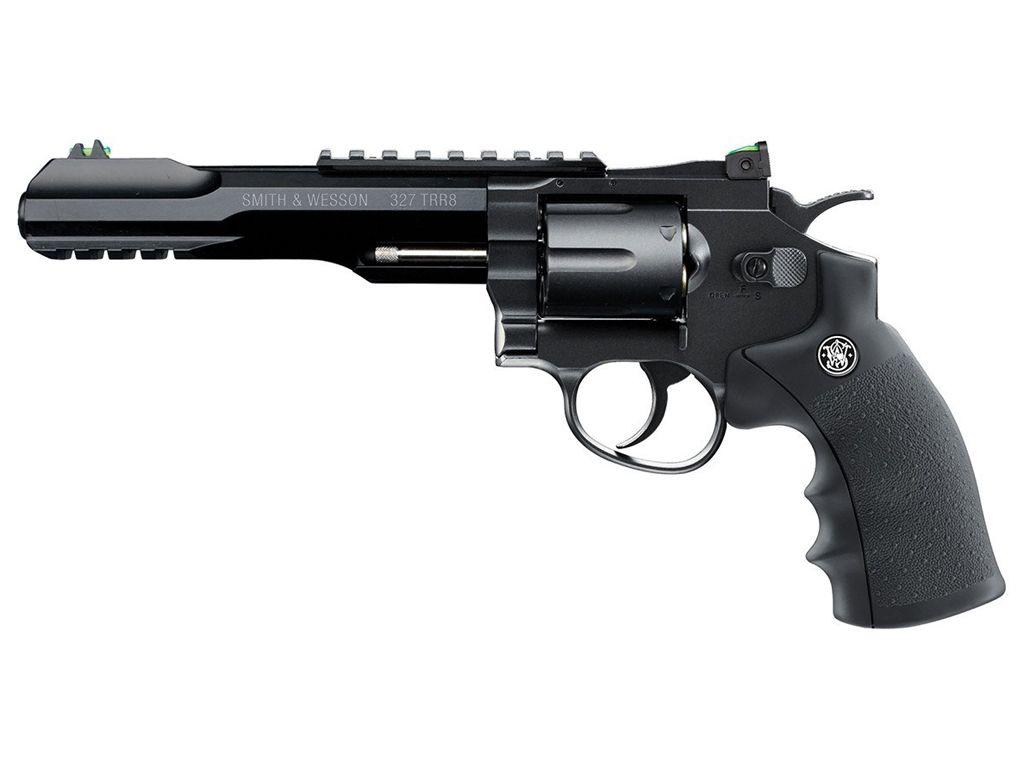 Trigger Pull: The trigger pull on the Umarex Smith & Wesson 327 TRR8 is good in both single and double action; I wouldn't say it isn't supper light in either action but pretty decent overall. I found shooting in single action to be the most precise as the release point is instant. Shooting in double action was also fairly predictable.

Accuracy: The results I got shooting my 6 round group from a 20 foot out position where none other than impressive and I would have to say the 327 TRR8 shot the best group (just over a 1/2 inch) I have ever recorded using 4.5mm steel BBs. I'm not even sure if I have bettered these results using pellets from a rifled barreled pistol? This goes to show you how well an accurate BB gun can perform when shooting from a reasonable distance.

Build Quality: With the Umarex S&W 327 TRR8 Revolver being mostly metal, you would expect it to have a decent build quality and I am happy to say it does. Everything looked and fit well, the CO2 Revolver had good heft to it and I had absolutely no problems shooting this gun. My only real reservation is the plastic CO2 screw tab but so far with my other guns that have the same type of tabs, they are holding up well.

Realism: The Umarex Smith & Wesson 327 TRR8 is very realistic in terms of looking and operating as a revolver with its brass shell casings you load juts like a real revolver, so yes it feels realistic and even looks a lot like a S&W 327 TRR8 to some degree. With that said, Umarex has taken some liberty on this one most likely because it is built off an existing airgun frame and to make it into a true 327 TRR8 replica would have required a complete redesign. I would have to say the Umarex S&W M&P R8 is actually a closer 327 TRR8 Replica than the gun reviewed in this video.

Comments: What's not to like about this Umarex Smith & Wesson Revolver? It's built very well, it most certainly looks good, it has the best tested accuracy I have seen so far from a BB gun, it shot even higher velocities than claimed, it gets tons of shots from a single CO2, and it loads up just like a real steel revolver but at a fraction of the cost to shoot! If you want to customize yours you have plenty of options with two weaver mounts top and bottom and it comes in at a very reasonable price tag!

Average Rating
Based on 13 rating(s)

this gun was really good at the start, I had no problems an loved shooting it, but after a while the quality started dropping, which is to be expected, but I didn't think it would break so fast. I wish the gun lasted longer but still a great gun
Was this review helpful to you?  0  0
Money Value
Accuracy
Quality
Nov 03, 2020

Great revolver
Was this review helpful to you?  0  0
Accuracy
Quality
Money Value
Jun 19, 2020

Bought this after reading all the positive reviews, a fun 6 shooter to add to your collection. For me loading the gun is all part of the experience, dropping shells into the cylinder is quite satisfying. It's well made for the money, less the flimsy handle, that gets the job done with accuracy. After dialing in the sight (rear sight adjustable) it performs well. The interaction with this revolver makes for an enjoyable experience. If you're looking to try a revolver for the first time, or add an inexpensive one to your collection, I'd recommend the S&W 327.
Was this review helpful to you?  0  0
Quality
Money Value
Accuracy
May 28, 2020

they work great and easy to use
Was this review helpful to you?  0  0
Accuracy
Money Value
Quality
Apr 22, 2019
Certified buyer

Nice little gun, its pretty accurate right out of the box, only thing is the grip on the hand for the co2 when i got it comes off with little to no force at all, theres no tabs really holding it on good, so the grip comes off all the time. takes a little bit of getting used to loading it cause it can be a pain but thats what you get for realism! buy extra shells for it cause the gun comes with a speed loader then every time dump the shells and use the speed loader to pop the other in and it cuts the time down between loading alot i found.
Was this review helpful to you?  0  0
Quality
Money Value
Accuracy
Mar 02, 2019

This gun has a lot going for it. This is a blast to shoot. The fiber optic sights are excellent for target acquisition. The all metal frame and loadable shells are great and really enhance the shooting of this gun. My only gripe is the handle. The grips are Mickey mouse and the balance is a little barrel heavy. That being said this is minor. Overall this gun is awesome and a great value. I recommend this gun big time.
Was this review helpful to you?  0  0
Accuracy
Quality
Money Value
Mar 10, 2016

I didn't realize I was a revolver type guy until I bought the TRR8. Fire six shots, walk up to the target,evaluate, load six more shells. Nice easy pace.This gun is WAY more accurate than my Sig 226 or Beretta 84FS - still have a very high opinion of both of them but the bar has definitely been set higher by the TRR8. I make my own targets with just a 1 inch ring and half inch ring within that. Just finished shooting three loads with the S&M TRR8 handheld at a target indoors from twenty feet on a half expired cylinder of CO2. Of the eighteen shots all but two were within the 1 inch circle, nine were within the half inch circle. Handheld! Unreal accuracy. My Sig 226 won't do that.BTW: You can remove the top sight rail if you wish. Instructions are in the manual, it's quite simple, but they tell you to remove the wrong pin at the top in the instructions. What you do is take a small Allen key and use it to tap out the smaller diameter pin at the top closest to the gun sight (when you look at the gun it's obvious which one is holding the sight in place, it's a hollow pin), unscrew the top screw on the sight, remove sight, then slide the rail off after loosening it with a small Allen key. No problem to reassemble.I'm not particularly mechanical but I found it all quite easy, and I think the gun looks better with the rail removed. Sleek, svelte,less techno geek than with the rail.The TRR8 is a wonderful pistol, and for the price you really can't go wrong. Highly recommended. Consider ordering extra shells with it.
Was this review helpful to you?  1  0
Accuracy
Quality
Money Value
Jan 22, 2016

I think the best combo of "realism" and performance

This is my first revolver BB gun and I was shopping for explicitly this: the best combination of performance (accuracy, CO_2 consumption, an ease to use factor) and realism (trigger pull, how the gun works). Tack on a price point about $30 cheaper than the Wesson revolvers, you can use the saved cost to get some more shells. For quality, the cons are the finicky grip holding the C0_2, the the CO_2 tab can keep the handle from closing if not tightened appropriately (Can see this becoming a problem as the seal may wear out), and the top rail can come loose. Other than that, it's a pretty solid build, almost all metal, and the sights seem to be pretty sturdy (A worry of mine). At $115, you can't really go wrong with this versus some of the cheapest Wesson revolvers, and you get the added bonus of the fiber optical sights (Which for me were easier to sight than iron sights shooting indoors).
Was this review helpful to you?  1  0

This post is really all about watching the YouTube video and seeing how these two similar CO2 4.5mm Steel BB revolvers compare to each other. I was working with a new Chronograph since again it was really dark outside and my old Chronograph does not like darkness. I did get some usable Chrony results with the new one but I did have to work for it ;) Read full article here: https://www.replicaairguns.com/2014/1/10/asg-dan-wesson-8-inch-revolver-vs-umarex-sw-327-trr8-head-to.html Buy S&W 327 TRR8 in Canada: http://www.replicaairguns.ca/smith-wesson-black-327-trr8.html