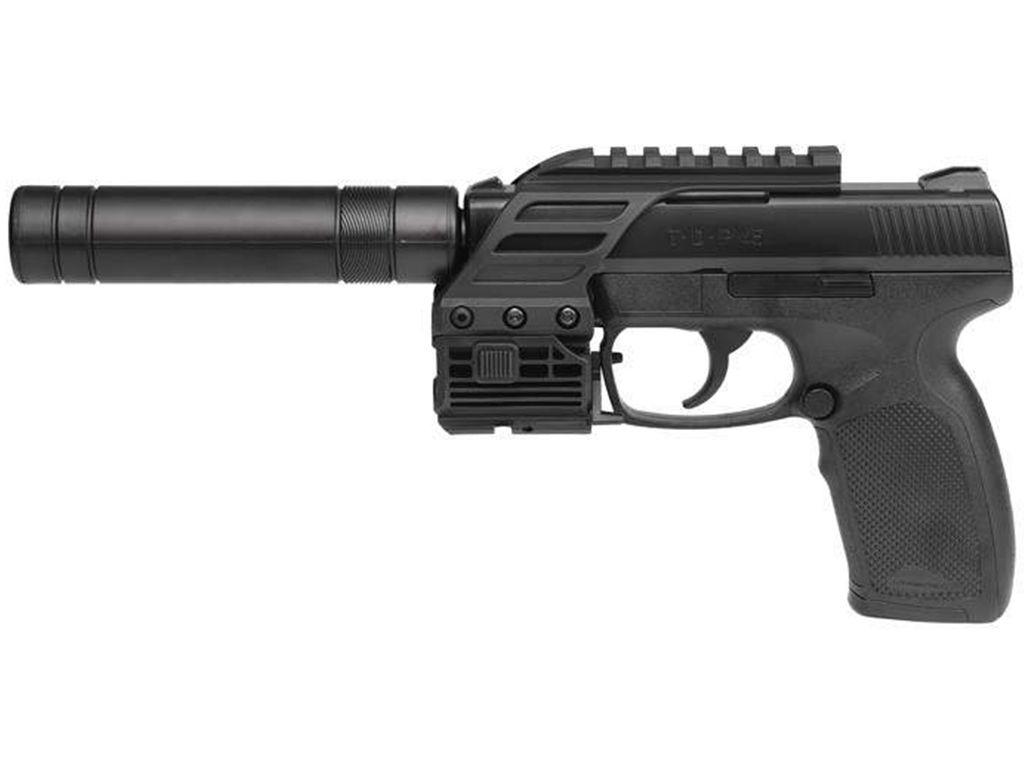 Trigger Pull: The trigger pull on the Umarex and TDP 45 TAC is medium to heavy but since it is a double action only trigger, this is to be expected. There is a fair amount of take up with the entire pull being about 8-9 pounds with the release point happening right at the very back of the pull, you get a bit of a clicking sound warning right before it releases. If you are used to shooting other lower priced double action triggers where the barrel protrudes out of the front of the gun when you pull the trigger then you will know what to expect with this this style of DOA trigger as the setup is pretty much exactly the same.

Accuracy: Since the TDP 45 TAC comes with a laser, I opted to use the laser over the open sights even though you have the choice of using open sights as there is an open channel under the sight rail allowing you to see both the rear and front sight pretty clearly. Of course you can mount a scope or red dot sight on the sight rail if you choose to. During my Field Test Shooting portion of this review I would have to say I got around a 2 inch 8 shot grouping but considering I actually took 10 shots, the extra 2 shots spread the grouping out a bit to around 4-5 inches. I do have to recommend you keep a close eye on the laser battery door as mine had a tendency to open up mid shooting. Perhaps some black tape is in order? In terms of FPS performance, my Umarex TDP 45 TAC shot really close the claimed 410 fps coming in at 397 with my 5 shot chronograph testing using a brand new CO2. You can expect to get higher feet per second performance on a warmer day since temperatures on my test day where not overly warm.

Build Quality: The Umarex TDP 45 TAC is built on a two sided plastics shell which you will find has all mechanical parts moulded into it with the exception of the trigger, safety and magazine release. Again, most of the build materials on the gun and the TAC accessories are plastic with the exception of some internal parts like the stick magazine, the barrel and the trigger. Because the gun is fairly light weight, even a hard drop would probably not cause to much harm with the fairly durable plastic and you won't have to worry about any paint wearing off ;)

Realism: The TDP 45 TAC CO2 BB Pistol is not actual replicas of any specific gun in production that I know of, it is styled after today’s modern mid to compact sized semi auto pistols but it is hard to pinpoint any one specific gun. The TDP TAC 45 does look like a real gun but it's function is based more around what the easiest way is to build a BB gun rather than how can we make this gun function as close to a real gun as possible. That said it is very efficient and simple in operation which should make it very reliable in the long run.

Comments:
For $60 you get a lot of fun and versatility for what you are spending. You could even take some of the Tactical accessories off like the sight rail and laser and sue them on some of your other air pistols with rails. No the Umarex TDP 45 TAC is not the most realistic or highest quality airgun out there but I bet you will get tired of shooting it before it wears out on you because it has such a simple internal firing mechanism. You can change the look by either taking some of the accessories off or adding even more, the choice is up to you!

Average Rating
Based on 4 rating(s)

First of all it should be noted that shipping was surprisingly fast. My package was delivered just 4 days after I placed my order, and that was with standard shipping. Replica Airguns had the lowest price around, even beating a nearby store by $15. Now onto the pistol. For a $60(ish) gun it’s actually very well made. Every detail on my gun is flawless. Its mostly plastic but has a decent weight and feel to it. The picatinny rail, laser and muzzle brake that are included are great accessories that really give the gun an attractive tactical look. Add a red dot / magnifier sight on top to complete the look. After a quick adjustment of the laser I had the accuracy of this gun within 2 inches. With an average of 395-400 FPS this gun is a blast to use! Time will tell how long this gun lasts but since I will only be using it a could times a year it should prove to have great longevity.
Was this review helpful to you?  0  0
Money Value
Accuracy
Quality
May 19, 2019

Very easy to use. Suppressor makes the gun look great, not to mention the laser. Can add one more accessory.
Was this review helpful to you?  0  0
Money Value
Quality
Accuracy
Apr 08, 2015

Too much fun for the money

Can be striped down to raw gun and rail and laser can be used on other guns. Mine has easily seen 2000 rounds and would still be going strong if I had stayed out of cold. I will purchase another before I will try something new. Well worth $$$
Was this review helpful to you?  0  0

This video is a walkthrough review of the Umarex TDP 45 Non-blowback CO2 BB Pistols. I show off this airgun close up from all angles and point out the mostly plastic external construction and go through the features and benefits of this low cost but very versatile BB pistols.

There is no actual shooting or testing for the TDP 45 TAC in this video but I am posting a Field Test Shooting Video at the same time! Link is right here:

The TDP 45 TAC CO2 BB Pistol is not actual replicas of any specific gun in production that I know of, it is styled after todays modern mid to compact sized semi auto pistols but it is hard to pinpoint any one specific gun. The TDP TAC 45 does look like a real gun but it's function is based more around what the easiest way is to build a BB gun rather than how can we make this gun function as close to a real gun as possible. That said it is very efficient and simple in operation which should make it very reliable in the long run.

Buy Airguns in the US Replica Airguns Store:
http://www.replicaairguns.com/buy-air-blank-guns-us/#!/~/category/id=2215343&offset=0&sort=normal


Check out the my full website review including some high detail photos: http://www.replicaairguns.com/posts/2014/6/27/umarex-tdp-45-tac-co2-bb-pistol-full-review.html
How are we doing? Give us feedback about this page.