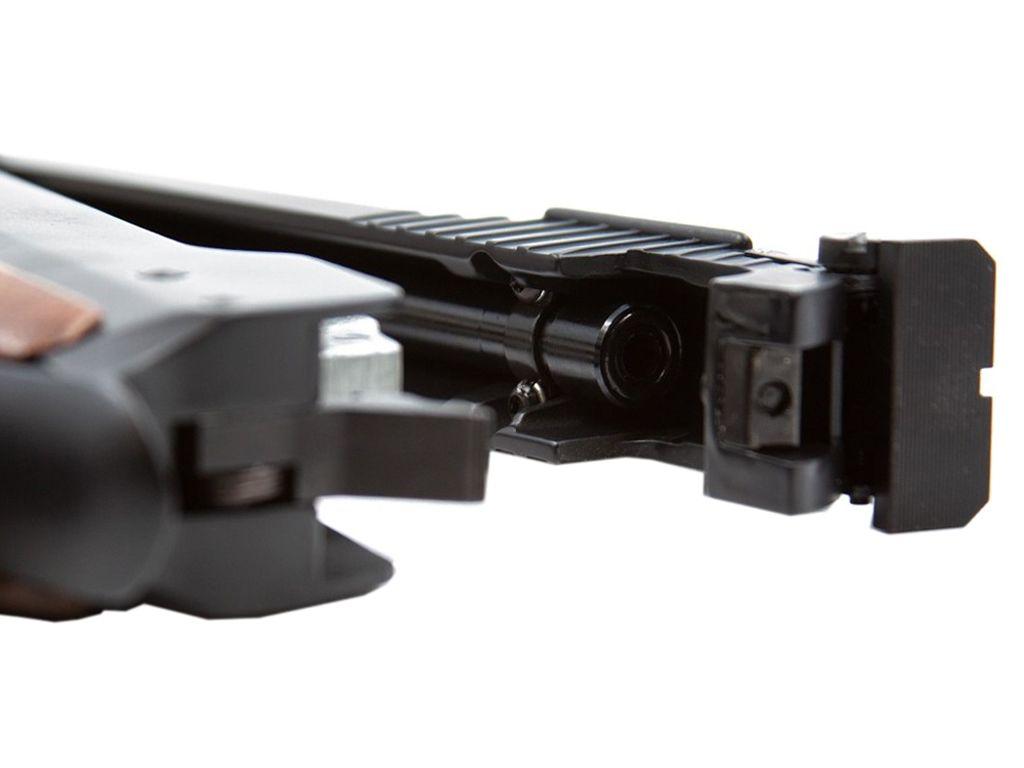 Trigger Pull: The single action only trigger pull on the Sig Sauer ASP Super Target .177 Caliber Pellet Pistol is fantastic right out of the box. I personally felt no need or desire to tamper with it as the trigger is crazy short and very light. That said if you feel the need to play around with the trigger adjustments you can as the ASP Super Target has a 2-stage adjustable trigger.

Accuracy: So far I have not done my official Field Test Shooting Video for the Sig Sauer ASP Super Target .177 Caliber Pellet Pistol , I did crack a few free standing shots down range in my Indoor Airgun Sea Can Shooting Range and was impressed with not only the trigger feel but how peppy the ASP Super Target felt. Sig claims a 350 fps velocity using lead .177 caliber pellets but I got the feeling they may have been moving faster than that? In terms of accuracy I was not shooting rested so it’s hard to say but I am expecting the Sig Sauer ASP Super Target .177 Caliber Pellet Pistol to be a tac driver for the price that you will pay for one!

Build Quality: The build quality for Sig Sauer ASP Super Target .177 Caliber Pellet Pistol is good, it feels solid and well made, the finish is also good but I did notice a slight casting imperfection on the front sight. I have found with Italian made Airguns they can sometimes have a few finishing flaws but overall they are mechanically very well made which is more important at the end of the day, but still for just under $500 Canadian I think this Precision Target Air Pistol should be near perfect!

Realism: The Sig Sauer ASP Super Target .177 Caliber Pellet Pistol is designed after the Sig Sauer P210 9mm Pistol with some liberties taken to accommodate the single-stroke pneumatic internal pump and reservoir. For this reason it is not exactly a 1 to 1 scale replica of the Sig Sauer P210 but it is fully Sig Sauer licensed and looks close enough for what it is at the end of the day.

Excellent gun, very accurate, easy to cock, very comfortable to shoot, very nice looking(just like a P 210) , very good quality materials, only problem with that gun is the price (for me because I'm not a rich man) but I guess all quality products come with a price-tag....
Was this review helpful to you?  0  0
Money Value
Dec 30, 2019

I have been target shooting in my basement for just a few months now, up to 30 feet, the longest I can do. I have 3 Berettas; the Umarex Storm, 92A1 and 92FS- my favorite for accuracy. This Sig Sauer Super Target blows them all away for precise accuracy, and has really improved my offhand shooting at 30 ft. It is now my favorite pistol, a pleasure to use. I use it with Meisterkugeln 7.0 gr pellets. This pistol is beautifully engineered and crafted, and the price here is probably better than you will find anywhere, at least in Canada.
Was this review helpful to you?  0  0


Read the rest of my Written Review along with additional photos over on the Replica Airguns Website:
https://www.replicaairguns.com/posts/2020/2/28/sig-sauer-asp-super-target-177-caliber-pellet-pistol-table-top-review

Read the rest of my Written Review along with additional photos over on the Replica Airguns Website:
https://www.replicaairguns.com/posts/2020/3/4/sig-sauer-asp-super-target-177-caliber-pellet-pistol-field-test-review

Buy the Sig Sauer ASP Super Target .177 Caliber Pellet Pistol in the US:
https://www.replicaairguns.us/super-target-asp-pistol-wood-frame-precision-177-cal-pellet-pistol
How are we doing? Give us feedback about this page.