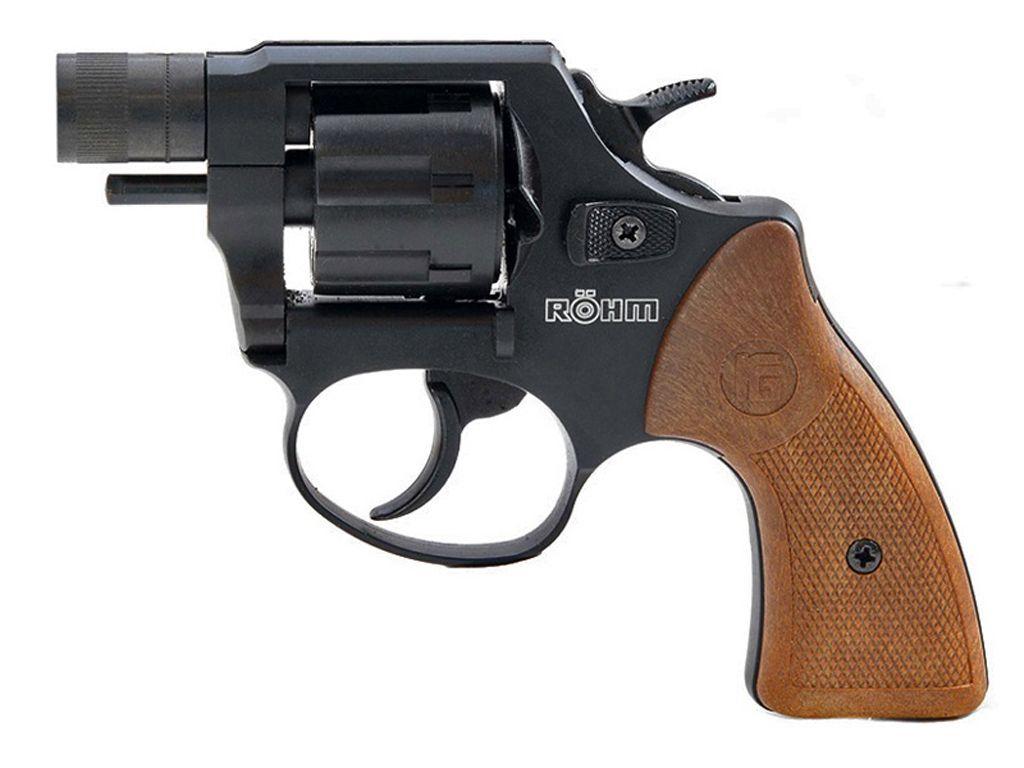 Trigger Pull: The trigger pull on the ROHM RG-46 22 Caliber Blank Revolver in single action is very light, having virtually no take up at all. The double action trigger pull is much heavier with a smooth release. Mechanically the trigger feels really good.

Realism: The ROHM RG-46 22 Caliber Blank Revolver is not an exact replica of any given gun in production, as this would make importing it into Canada even more difficult, but it is styled after a Smith & Wesson Snub Nosed Revolver. It looks and sounds like a real gun, with the exception of the dangerous bullet coming out of the barrel!

Comments: The main purpose of the ROHM RG-46 22 Caliber Blank Revolver is to make noise, along with the added ability to shoot flares, and that's exactly what you're getting here. It may not be as elegant as other ROHM revolvers with nicer barrels, but with the ROHM RG-46 you are getting the most compact 7 round shooter and at a bit of a lower price than the other full sized ROHM Blank Guns.

Beautiful
Was this review helpful to you?  0  0


I think this may be a record for me, I mean following up a Table Top Review with a Field Test Shooting video within a day of each other! If you have not already watched my Table Top Review for the ROHM RG-46 22 Caliber Blank Revolver than make sure to do give it a look.

Shooting Field Tests of blank guns are really pretty simple. There is no accuracy or chronograph test to consider since there is no bullet coming out of the barrel, kind of makes it hard in this case. This may even seem a little bit weird since what is there left to actually test? I guess as long as I pull the trigger and it goes "BANG" each time then we have ourselves a winner on our hands :)

I can attest that the ROHM RG-46 22 Caliber Blank Revolver was a clear winner on this day. I loaded 7 rounds into the 7 shot cylinder and then pulled the trigger 9 times. And as you can imagine the first 7 trigger pulls went "BANG" each pull while the last 2 trigger pulls went click-click as expected...

All fun aside the ROHM RG-46 22 Caliber Blank Revolver Field is a really nice quality blank revolver great for many situations like; Gun training, animal training, scaring off pests, stage or movie props or just collecting for fun.

Read the rest of my written review with additional photos:
https://www.replicaairguns.com/posts/2018/4/4/rohm-rg-46-22-caliber-blank-revolver-table-top-review

Buy ROHM Blank Guns in Canada:
https://www.replicaairguns.ca/blank-gun-pistols
How are we doing? Give us feedback about this page.