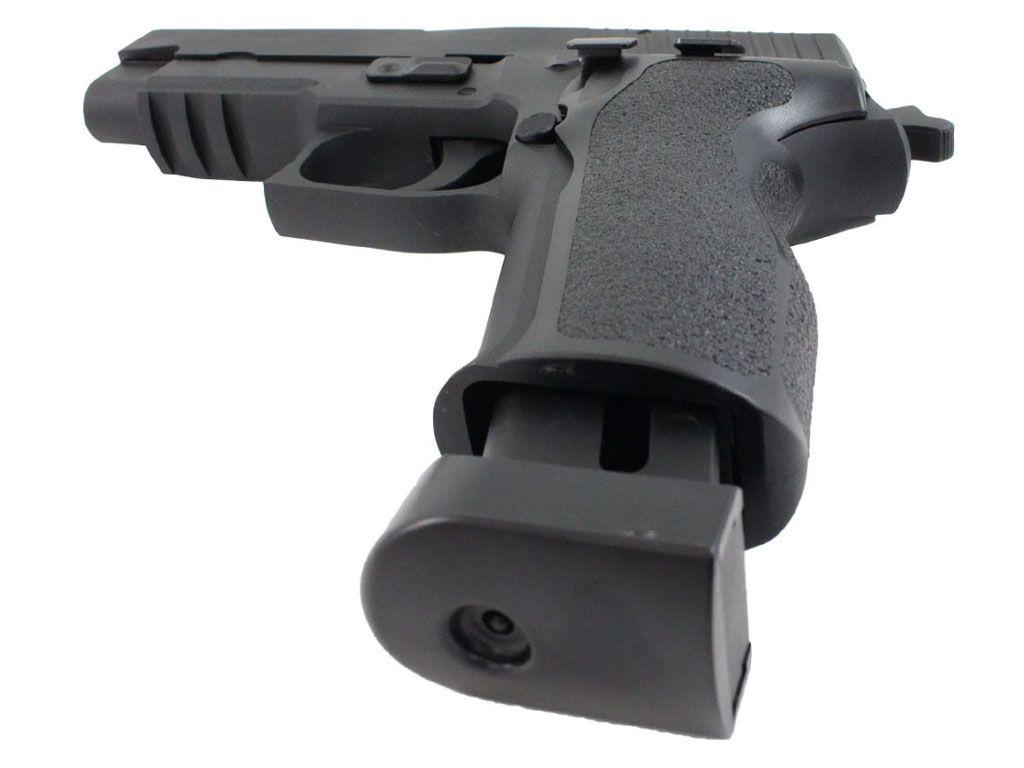 Accuracy: Here is what I had to say about the Cybergun Gas Magazine version: "Shooting the Cybergun Sig P226 from 20 feet out in semi rested position I was able to get very good results. I placed 10 rounds in about 1.5 inches with the shot placement being a bit low possibly due to my barrel mod, adjusting the hop-up may bring the aim point back up to where it should be. The Sig Sauer P226 Airsoft Replica shot right around the 316 fps range while conducting my 5 shot average chrony testing which was lower than advertised but I was using much heavier .20 gram BB's. You can expect to get a full magazine worth of shots out of each gas fill-up but I did notice that as the magazine got colder it did tend to become much less efficient and also seemed to vent a lot of vapor.

Build Quality: The build quality for all KJ Works guns is one of the best in the business. Fit and finish is top notch with close tolerances in the working parts as you would find in a real steel gun. The paint is excellent and will wear much better than other airsoft guns out there. The KJ Works KP-01 E2 (Sig Sauer P226) Airsoft Pistol is pretty much all metal and feels it, the recoil spring is nice and firm and all working parts are smooth and crisp when operated.

Realism: The KJ Works KP-01 E2 is a replica of the real steel Sig Sauer P226 with the exception of the licensing. It's a great-looking and functioning airsoft replica. You can field strip this gun exactly like a real Sig Sauer and all the mechanical parts work just the same, including a working decocker and adjustable front sight. It is really hard to distinguish the airsoft version from the real Sig P226 in both looks and feel.

Comments: I am a huge Sig Sauer fan so I have high expectations with a replica gun! The KJ Works lineup as a whole is really fantastic, and what I say about the KJ Works KP-01 E2 can be said about the entire lineup. KJ Works makes a well-built product that replicates the real steal version almost exactly other then they shoot airsoft BBs instead of actual bullets. When holding a KJ Works gun in the hand you can feel the quality in its weight and balance, especially when operating the slide, trigger, and other working parts. Everything just feels so perfect and responsive. For the money you cannot go wrong with the KJ Works KP-01 CO2 Blowback Airsoft Pistol or any other KJ Works gun for that matter.

I got this gun because I wanted to just see the hype of this brand of Sig Sauer even though this gun is technically unlicensed but nonetheless a well made piece. Could do better on gas efficiency though for CO2 and maybe even green gas and be careful of the front sight, it can fall off if left unchecked.
Was this review helpful to you?  0  0

This is my Official Field Test Shooting Review video for the KJWorks KP01-E2 (Sig Sauer P226) CO2 Blowback Airsoft Pistol. You can also checkout my Table Top Review where I go into more of the specifications and features of this fine KJWorks pistol and show you around the Sig Sauer P226 Airsoft gun and even do a Field Strip of it.

In this Field Test Shooting video I test out the performance of the KJWorks KP01-E2 (Sig Sauer P226) CO2 Blowback Airsoft Pistol using my Chronograph to get a real world (FPS) Feet Per Second rating. I also position myself 30 feet back and shoot 10 rounds at a paper target using a semi-rested shooting position (Sand bag up front and standing in the back).

I am a huge Sig Sauer fan so I have kind of high expectations with a replica gun! The KJWorks lineup as a whole is really fantastic, and what I say about the KJWorks KP01-E2 (Sig Sauer P226) CO2 Blowback Airsoft Pistol can be said about the entire lineup. KJWorks makes a super well built product that replicates the real steal version almost exactly other then they shoot Airsoft BB's instead of actual bullets. When holding a KJWorks gun in the hand you can feel the quality, in weight, ballence and especially when operating the slide, trigger and other working parts. Everything just feels so perfect and responsive. For the money you can not go wrong with the KJWorks KP01-E2 (Sig Sauer P226) CO2 Blowback Airsoft Pistol or any other KJWorks gun for that matter.

Buy KJWorks Airsoft Pistols in the Canada Replica Airguns Store:
https://www.replicaairguns.ca/kj-works
How are we doing? Give us feedback about this page.