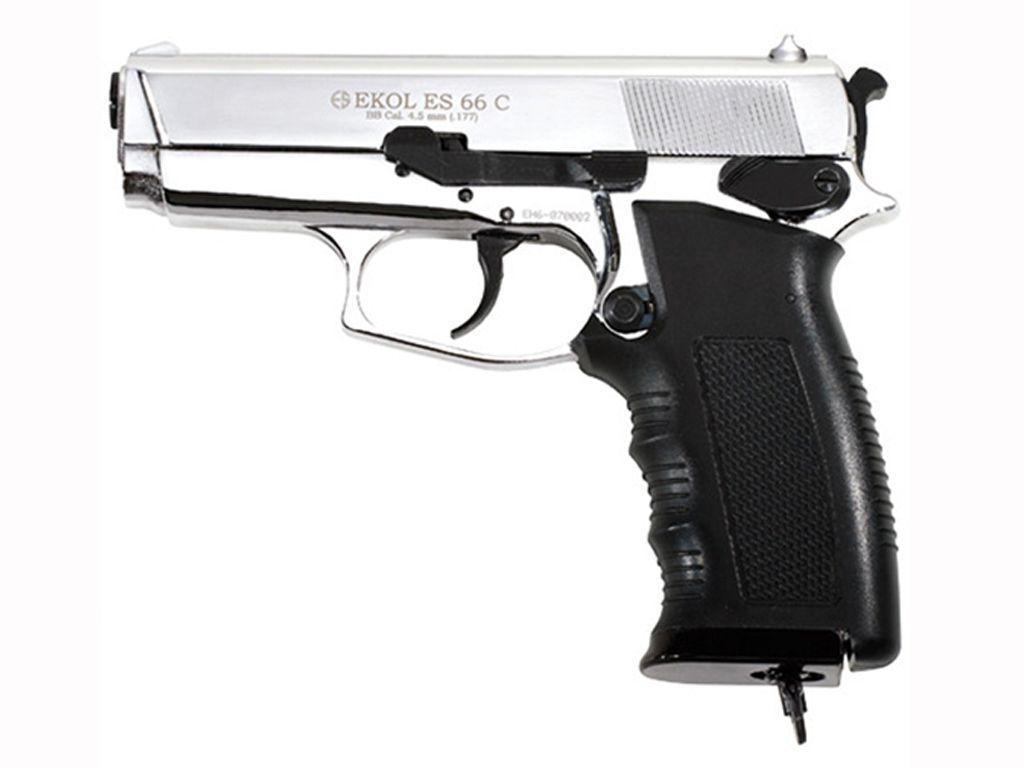 Accuracy: I have not shot either of these EKOL ES 66 styled airguns but I have conducted a similar test using a similar EKOL BB  Pistol, the EKOL ES 55 which is basically the same base gun with a different slide. I would expect all of the EKOL airguns to shoot about the same. Based on my past experience the ES 66 C and ES 66 should shoot right around 420 fps or more and get 1-2 inch groupings from 30 feet out. We will find out for sure when I conduct my official Field Test Shooting Review for them.

Build Quality: The EKOL ES 55 comes from a company that primarily makes blank pistols. EKOL makes this gun directly from a similar model (The EKOL Sava) that shoots blanks so in many ways the ES 55and ES 66 are designed more like a real gun than an airgun. The EKOL ES 66 Series is all metal with rubber grips and feels fantastic in the hand. There are really no plastic parts to speak of and I could not find any quality concerns on these airguns at all! The Chrome finish is something you don't often see in airguns but does look nice, just watch out for those finger prints ;)

Realism: The EKOL ES 66 CO2 BB Pistol is not an exact replica but does look a lot like a browning Hi-Power other than some small cosmetic differences. The basic size and shape is very close. With the shorter EKOL 66 C, this similarity is harder to see.

Comments: EKOL makes several blank guns and I have reviewed many of them back when we used to be able to import more varieties of blank guns here in Canada. What makes the EKOL airgun version kind of different than most airguns out there, is that it is made very similarly to the way EKOL makes their blank guns. Many parts are interchanged so in some ways the airgun is a lot like the blank gun version which one could say is a lot like how a real gun is made. What I am getting at here is that the EKOL ES 66 and ES 55 look and feel more like real guns than an airgun. Make sure to pick one of these EKOL airguns up before we run out, our supply for them is limited and when they are gone we may not be able to get any more

Good shot count, about 7 mags. Good weight to pistol, feels good in hand. Accuracy shoots high, very high and to the right. Going to shoot it more to see if there is a break in period changes accuracy. Nice case and manual field strip with help of flat screwdriver. Just got it, will review at later time for update on the accuracy. FPS very high, 450 to 490. Looks great if anything else nice gun for an air collection.
Was this review helpful to you?  0  0

Here is my official Field Test Shooting review for both the EKOL ES 66 and ES 66C CO2 4.5mm BB Pistols. Make sure to watch my Table Top Review for more information on the Features and Specifications for both of these all metal Turkish made air pistols.

As with my standard Field Test Shooting Reviews, I shoot 5 rounds through my Chronograph to get a real world Velocity reading in feet per second. I also shoot 10 rounds into a paper target using a semi-rested position from 30 feet away. Since I had two versions of the EKOL ES 66, the long and short barreled versions I decided I would test pistols both on the Chrony and just the long barrel version for the accuracy testing.

Buy airguns from the US Replica Airguns Store:
http://www.replicaairguns.com/buy-air-blank-guns-us/#ecwid:category=0&mode=category&offset=0&sort=normal

Check out the full written review with photos on my website at:
http://www.replicaairguns.com/posts/2015/2/14/ekol-es-66-co2-bb-pistol-table-top-review.html
How are we doing? Give us feedback about this page.