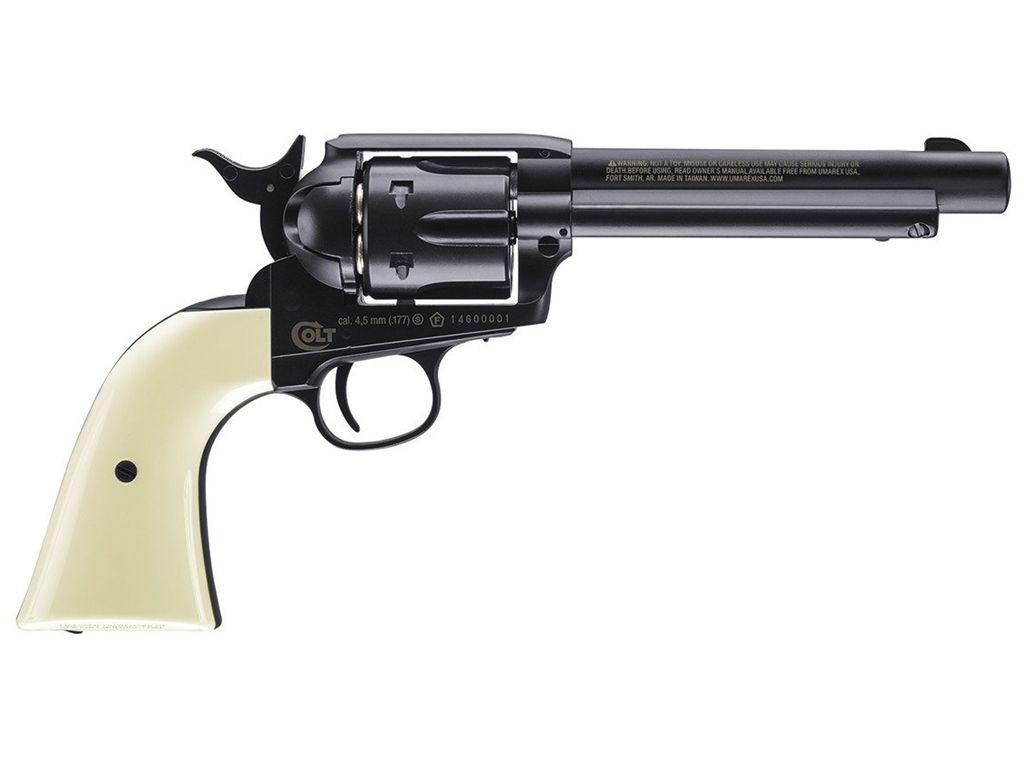 Accuracy: I tested both 4.5mm steel BB's and 4.7mm Lead ball BB's in the Umarex Colt Single Action Army Shell Loading BB Revolver. With the Steel 4.5mm BB's I shot just under a 2 inch 6 shot grouping when shooting from a 30 foot distance using a semi rested position (Sand bag up front, standing in the back). The shots where pretty well center hitting the paper target just a little bit high, they did seem to stray a little more left and right rather then up and down. When I switch ammo to the 4.7mm Lead BB's I got a similar 2 inch grouping but they hit the target a bit lower and tended to shoot tighter from side to side with more variation up and down, perhaps because the lead BB's did not seem to shoot at a very consistent velocity. My Chronograph testing for the Steel BB's was right around 400 fps while the Lead BB’s, which are heavier, shot a bit slower at just under 300 fps.

Build Quality: The Umarex Colt Single Action Army Shell Loading BB Revolvers have a mostly all metal construction other than the plastic grips and any seals. The fit and finish is excellent with a great overall weight in the hand, whether you get the Nickel or Blued version. The mechanical action of the hammer and trigger feels just like it would on a real single action army revolver.

Realism: In terms of replicating a real steel Colt Single Action Army Revolver, Umarex has done a really great job with their CO2 BB firing version. It's really hard to tell one from the other except for the smaller shells and the discreet safety switch located under the frame. Even the barrel is nicely recessed and has some fake rifling twists in it. The CO2 is well hidden with the Allen key built into the handle so no ugly screw tab hanging down.

Comments: All I can say is we finally got our Airgun 1857 Colt Single Action Army Revolver! I have been asking the big airgun companies for this for a while and I knew it would be very popular once made available. As it turns out, not only do the "Americans" want one, but so do many folks overseas! I am really glad that time and effort was put into this first version and we got such a great product that looks amazing and shoots just as good as it looks. For anyone who is interested in owning the classic cowboy six shooter, you have to make sure to get one of these super realistic Single Action Historic Revolvers!

Average Rating
Based on 3 rating(s)

Pro: Single action trigger is light and amazing. Gun looks great, Co2 last forever.Con: Reloading every 6 shots is not fun, buying the extra shells is not going to make it better because the cylinder wont swing out for speed loading. You might as well just reload the shells in the cylinder. (I bought the extra shells and learn it the hard way)
Was this review helpful to you?  0  0
Money Value
Nov 19, 2016

Purchased this gun not to long ago and revived it in great time. The gun is very well biult and looks amazing in person! I had no trouble hitting 12oz pop cans at 40 feet and was amazed at the amount of shots you can get per co2. Overall very impressed at the realistic feel compared to the real revolver and am debating on picking up another one in the near future!
Was this review helpful to you?  0  0

I decided to split this Field Test Shooting Review of the Umarex Colt Single Action Army into two parts since i wanted to do multiple tests with multiple types of ammo and dummy shells. at the end of the video I also throw in my Cybergun / KWC 1911 Blowback BB Pistol just for fun since both of these pistols where used in the US Military.

I start off by testing out the Umarex Colt Single Action Shell Loading BB Revolver shooting 6 rounds through my Chronograph using the included Umarex Dummy Shells with steel 5.1 grain 4.5mm BB's since this is what most people will experience. In my second test I switch up the ammo slightly and try out some much heavier Lead BB's that are a bit larger than 4.5mm (about 4.7mm) and weigh in at somewhere between 7-8 grains.

Of course lastly I bring out my KWC Cybergun / KWC 1911 Blowback BB Pistol and put 6 rounds through the Chronograph just for fun :)

Make sure to watch the my full YouTube video to find out how each shooting option worked in the Umarex Colt Single Action Army Shell Loading BB Revolver, to quickly summarize how each 6 shot gun averaged out:

What do you do when you have some nice weather and a brand new Umarex Shell Loading Colt Single Action Historic CO2 BB Revolver that you are itching to try out! Well you go shoot it, that's what you do! So I thought I would setup a bunch of miscellaneous targets along with some cameras and record the fun so you all could join me :)

I did use steel BB's for the most part but I also gave some lead BB's I had lying around a try, the lead BB's are a bit larger in diameter so they fit fairly snug, I would not recommend using them on anything other than a brand new CO2 cartridge or they could get stuck in a shell or the barrel. The lead BB's are also much heavier than steel BB's so they do not go as fast but seemed to work pretty good for me. A great option if you are shooting at metal targets with your Umarex Colt Peacemaker!

This is my full table top review where I show you around both the Blued and the Nickel Umarex Colt Single Action Army Shell Loading CO2 BB Revolvers. I also compare them to some other SAA revolvers I have and a Dan Wesson 8 inch.

I also talk about how these amazing old west six shooters perform while shooting them at paper targets and also through a Chronograph.

In this video I feature my top five favorite BB pistols for early 2016. That said there are lots of other BB pistols I truly love and enjoy but I had to pick 5 so these are them! You may notice that many of them are blowback, I do like the blowback guns after all and this is my top 5 pick so naturally many of them will have blowback action.

Here is a list of my top 5 guns featured in this video not necessarily in order of choice:

Some more new guns I will be checking out, well one is just a different finish of the Umarex Colt SAA Revolver but for sure worth taking a look at in this Preview Video.

All the guns in the YouTube Preview Video and CO2 4.5mm BB Pistols, three are styled after revolvers and one is based on a semi auto modern pistol.

Starting with the revolvers I show off the absolutely gorgeous blued finish on the Umarex Colt Single Action Army BB Revolver and it all I can say is it really needs to be seen in person to fully appreciate how great it looks. I was not expecting the blued version to look nicer than the Nickel version but in my opinion it is my favorite of the two. And that's not to say the Nickel version is not a great looking pistol in it's own right.

I've been waiting a while to see firsthand the Webley & Scott MK6 CO2 BB Revolver and it finally came this week. Another really well built and designed classic Revolver to add to the list of shell loading CO2 BB Revolvers. I was really impressed with the trigger and hammer action, both single and double action feel super smooth and the position of the hammer makes for really easy draw for single action shooting. The 2.4 pound all metal weight give the Webley & Scott MKVI great balance and realism, while the top-break design makes for super easy loading.

Not to be mistaken with the Full Metal Shell Loading Umarex Colt Python 357, I take a look at the more affordable Umarex Polymer Colt Python 357 that fits the bill nicely when looking for a BB Revolver with a nice hammer and trigger, fully adjustable sights, and higher than average capacity magazines than your standard revolver.

Last but not least I look at another fairly affordable CO2 BB Pistol, the Umarex HK45. It's a pretty basic CO2 BB pistol but looks really good and has decent weight with its metal slide. The HK45 features white dot sights, a Picatinny rail, an all metal drop out stick magazine and full Heckler and Koch licensing.

Maks sure to check these guns out in our Canada Replica Airguns Store: https://www.replicaairguns.ca/

In this unboxing preview video of the Umarex Colt Peacemaker Single Action Army Revolver I show you around the CO2 4.5mm BB Revolver Replica and even compare it to a few similar revolvers I have lying around.

The Umarex Shell Loading Colt Peacemaker is an amazing replica and simulates the old west cowboy Single Action Only Revolvers in almost every detail. I love the hammer action and the ratchet sound it makes as you draw it back. The Single Action Only Trigger is very light at under 2 pounds just as it should be.

Buy BB pistols in the US:
http://www.replicaairguns.com/buy-air-blank-guns-us/#!/Air-Pistols/c/2215343/offset=0&sort=normal
How are we doing? Give us feedback about this page.