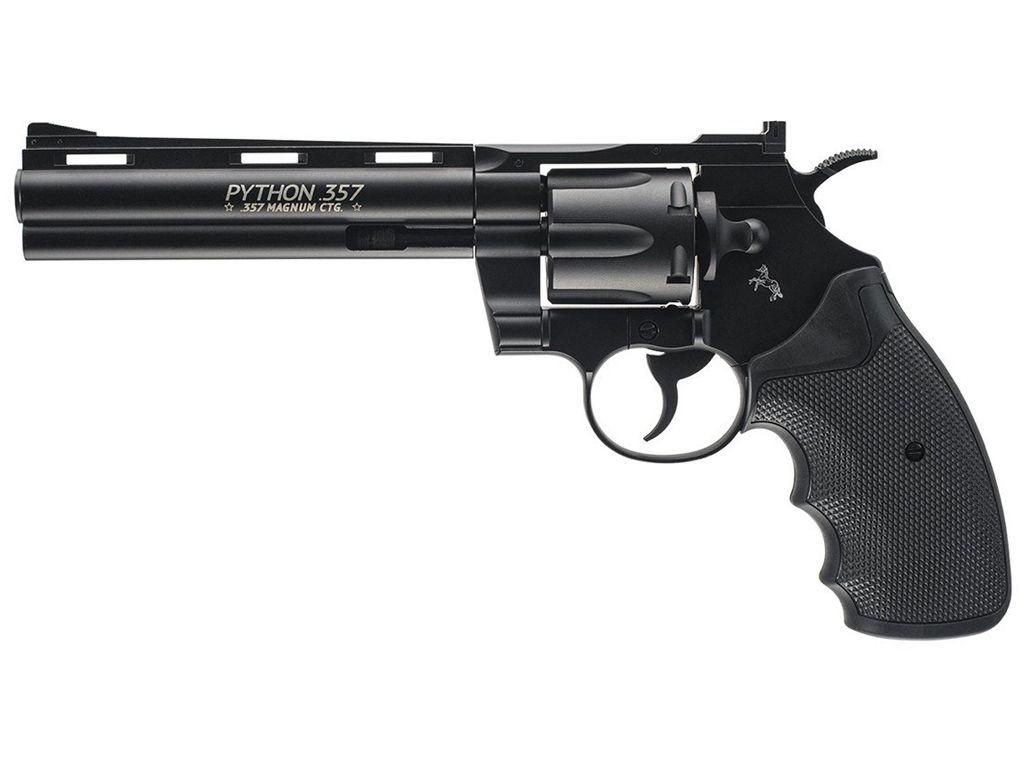 Trigger Pull: The trigger pull on the Colt Python 357 CO2 BB Revolver is good in both single and double action and even better than the Dan Wesson and S&W 327 TRR8 shell loading revolvers most likely because the spring tension that pushes the inner barrel to make contact with the cylinder is noticeably lighter. Even the hammer is smoother and has less wiggle with a better trigger and hammer mechanism overall.

Accuracy: The results I got shooting my 6 round group from a 30 foot out semi-rested position were good overall. Vertically, there was about a 2 inch spread while horizontally there was about a 1 inch spread. I did find that the plastic tips on the brass shells seemed to be a bit tight at first and this is when I did most of my Chronograph and target shooting. I believe the tightness affected the consistency of the FPS which also affected the accuracy especially up and down. I did get one shot out of the Umarex Colt Python 357 well over the claimed 400 fps but again the fps was rather erratic most likely because of the snug BB fit due to shell break-in.

Build Quality: The Umarex Colt Python 357 being mostly metal, you would expect it to have a decent build quality and I am happy to say it does, perhaps again even better than the Dan Wesson and S&W 327 TRR8 shell loading revolvers. Even the weight of the Colt Python came in close to a half of a pound more! The only real plastic I could find was in the grips and the shell tips. Fit and finish was also good with no noticeable paint wear or sloppy workmanship.

Realism: The Colt Python 357 CO2 BB Revolver overall is a close copy of the real steel Colt Python 357. I did notice the rear portion of the receiver (between the rear cylinder and hammer) to be a bit longer perhaps to accommodate the CO2 valve length, but other than that this pistol is super close to the original revolver it is based and licensed on. Again being all metal gives this CO2 BB revolver very realistic weight and feel and the loadable brass shells make using this gun almost exactly like using a real shell loading revolver but for much less cost per shot and of course a lot less recoil on the hands.

Comments:
The ASG Dan Wesson shell loading revolvers reintroduced me to the joy of loading and shooting a revolver which, up until that point, was not that realistic of an experience when using a BB or Pellet revolver. The Umarex Colt Python 357 has taken it up a notch by adding just a bit more overall weight, a smother trigger and hammer mechanism and styling this revolver on the Classic Colt Python platform. All of this is even less than the cost of the original Dan Wesson shell loading series CO2 BB revolvers. If you're a revolver fan, make sure to grab one of these and if you're not a revolver fan, this pistol may just change your mind

Average Rating
Based on 7 rating(s)

High quality, worth the money

I love this revolver! Very high quality, my friends all think I have a real one. It's very accurate, in my backyard I can easily shoot less then one inch group at about 6 metres. It's enough for me. Only had one problem, I dry fired once and I can hear the gas leak at the chamber side valve，but after I shot again the sound disappeared.
Was this review helpful to you?  0  0
Quality
Money Value
Accuracy
Apr 06, 2020

I purchased this item last month, very please with this purchase. I have a real one also, but this unit has the feel and weight of the original. Unbelievable of it's looks and performance. The ultimate unit for target practice,without the cost of live amo. I definitely recommend this 357 Python................. HAVE FUN AND BE CAREFUL
Was this review helpful to you?  0  0
Quality
Money Value
Dec 20, 2019
Certified buyer

Okay... first of all lets deal with the cylinder wobble as was noted below. This is due to the fact that the cylinder has to engage both the gas valve (at the hammer) and the rubber spring loaded exit nipple when you have to close the cylinder. Kind of an interference fit if you will. It is NOT as issue of quality. This revolver is well made and heavy. It is all steel except for the grips. The BB's fit snuggly into the shells. I bought the extra speed loader and shells...Its fun to drop the spent brass and reload. Quite a realistic feel actually. Gas cylinder loading is easy. The complaint obout the grips feeling overly bulky... I can only conclude that person never held a real one. The rubberized plastic combo grip does not feel cheap. It shoots really well and the grouping was less then 2" at 30 feet with 4 inside 1" out of 12 shots. My only complaint. Its NOT very loud. Nothing like the KWC M1911 Blowback Pistol. Shipping was fast!! Customer service was great.!! I have no problem reccomending this piece to anyone. Its well made, good looking, very realistic and it feels good in the hand. Just a note... watch the video review of this revolver.=. You will then get a good idea of what you are buying. Thanks RAG
Was this review helpful to you?  0  0
Money Value
Jan 02, 2019

I like the gun generally, it feels and looks like the real thing, I am not really impressed by the uncomfortable grips but that I can overlook. My worry is that the cylinder is very wobbly and seems rather loose, I would like to know if that is a common trait with this particular model or did I just get a dud, if I did get a dud is there some way of tightening the cylinder up myself?
Was this review helpful to you?  0  0
Money Value
Accuracy
Quality
Apr 29, 2015

I love the rubber/plastic grips, they don't hurt your hands. Also i really love the weight to it, It feels to me like i'm holding a real colt python, It is pretty Darn accurate and can hit pop can easily from 20-50 feet away! It is very conservative on co2 but still releases enough each time to give you a little bit of kick on a full cartridge. i am NOT disappointed at all, And i think it should actually be more expensive than it is. I would prefer this over a "Dan Wesson" BTW i still like the Dan Wesson's :)
Was this review helpful to you?  1  0
Money Value
Quality
Accuracy
Nov 05, 2014

Always fun when a revolver is involved and the Python does NOT disappoint! Well designed and quality crafted leave you feeling power in your hand...A good kick when fired and surprisingly accurate leaves me not wanting to put it down...love the realistic she'll bb holders, a real nice touch!
Was this review helpful to you?  2  0

This is a table top and shooting review combined of the Umarex Colt Python 357 CO2 BB Revolver. I show you around this BB revolver and walk you through its basic operation and handling. I also did a pre-test for the Umarex Colt Python out with my Chrony Chronograph to see what the real world fps velocity actually is and I also shoot it from 30 feet out on a target to see how accurate this target pellet shooter is on a paper target.

The ASG Dan Wesson shell loading revolvers reintroduced me to the joy of loading and shooting a revolver which up until that point was not that realistic of an experience when using a BB or Pellet revolver. The Umarex Colt Python 357 has taken it up a notch by adding just a bit more overall weight, a smother trigger and hammer mechanism and styling this revolver on the Classic Colt Python platform. And all of this for even less than the cost of the original Dan Wesson shell loading series CO2 BB revolvers. If you're a revolver fan, make sure to grab one of these and if you're not a revolver fan, this pistol may just change your mind :)


Check out the full Table Top Review on my website at:
http://www.replicaairguns.com/posts/2014/4/22/umarex-colt-python-357-co2-bb-revolver-table-top-review.html