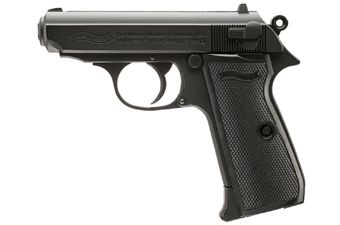 Comments: Make 007 proud with this authentic Walther PPK replica. Nearly identical in weight and size to the weapon famously used by James Bond, this CO2 BB pistol makes a great trainer. Features include blowback action, a 295 FPS velocity, and front and rear sights.

I bought this to add to my collection of authentic bb/pellet (not airsoft) airguns. And that is the ONLY REASON that you should buy this. It has absolutely TERRIBLE accuracy, and it's weak...under 300 fps. This gun can give you 8 inch to 10 inch spreads at even only 15 feet!!! YA, 8 to 10 inch spread patterns!!! It's painfully inaccurate at the best of times. So if you want this gun, I recommend it only to those who want this old classic (let's be honest, cuz it was James Bond's gun until more modern times, it's a .32 caliber in real life, which is way weaker than 9mm) for the purpose of showing it off on a wall of guns.
Was this review helpful to you?  0  0
Quality
Accuracy
Money Value
Oct 05, 2020

Fantastic in visuals, somewhat lacking in other places.

As a Canadian, owning a PPK/S properly is basically beyond my grasp. The 'fixed' Canadian variants completely ruin the silhouette of the gun, which I quite like. Even beyond the original allure to this gun as the famous MI6 standard issue sidearm, its body is one of the most recognizable for me. Its short, sleek barrel and subtle curve from the tip down to the trigger guard is unmistakeable. For this Umarex replica, the shape and weight is pitch perfect. It feels substantial in my hands, and the blowback makes it feel much more powerful and fun to shoot than other non-blowback replicas. The drawbacks are in the portions of the gun that aren't metal, however. The grip feels cheap to the touch, and the magainzes are even more pathetic to a disappointing degree. I own a non-blowback Luger without the iconic toggle-lock action, but its magazine is made out of the same steel the gun is made from - easily making the whole gun feel much more substantial when it isn't being fired. Quite frankly, if I had the PPK/S with a similar metallic heartiness to it I'd pay any amount of money. That's not to say this isn't a great gun to own, however; the drawbacks are quite nitpicky, but the gun shoots well and feels nice in the hand. It's in my opinion that every girl with a PPK is exponentially more attractive than without, and even though this just shoots BB's it still makes me feel absolutely unstoppable. Couldn't recommend this pistol enough (unless a new version comes out with a better grip and mag!)
Was this review helpful to you?  0  0
Money Value
Quality
Accuracy
Jul 15, 2020

More than met my expectations, I love holding this thing. Quality is there and super fun to shoot. After watching a couple videos on youtube, I would recommend doing the spring mod to get a better blowback action. I lubricated the pistol after one clip and noticed significant improvement. The barrel is not threaded which explains the accuracy. The 12gr co2 cools down pretty quickly in the ppk two clips max.
Was this review helpful to you?  0  0
Accuracy
Quality
Money Value
Jul 09, 2020

Great overall value. Nice blowback. Slide conveniently stays open after last BB fired. No jamming so far. Mags re easier to load than expected. They may be plastic, but should have a long life if not chewed or stepped on. Opening the blister pack will soon have you wanting to take an axe to it. But all worth it.
Was this review helpful to you?  0  0
Quality
Accuracy
Money Value
Jul 03, 2020

The delivery time was faster than expected. This Umarex pistol is a very well made replica of the real Walther PPk/S ! The only thing I would say is that the paint on the hammer and around the trigger is not good quality compared to the rest. Still very happy with what I got. I recommend it.
Was this review helpful to you?  0  0
Accuracy
Money Value
Quality
Jun 23, 2020

awesome little gun, fun to use for target shooting, very accurate at smaller distances, but should be expected use with a smaller gun, the blowback action makes it very satisfying, especially when exchanging magazines
Was this review helpful to you?  0  0
Accuracy
Quality
Money Value
Jun 15, 2020
Certified buyer

Great gun for the collection

I just received this gun today. Awesome looking full metal replica. It's made in Japan, so that explains the quality. Feels great in the hand and fairly heavy. Haven't shot it yet, but should be good. If Umarex is listening, they should absolutely replace the flimsy plastic BB stick with a real metal one.. that's the weakest point of the gun. And I guess they are prone to breaking, that's why they include 2 extras. One thing I was shocked for was the ATROCIOUS packaging it comes in.. a stupid plastic clam shell... is it a dollar store plastic water gun, for God's sake?? You have to literally destroy the packaging to take it out. Cannot be used to store the gun. All my other guns came in nice boxes, which I store them in. I'll have to figure out how to store this one.
Was this review helpful to you?  0  0
Money Value
Jun 03, 2020

Who hasn’t wanted to get hold of the famous 007 Walther PPK? If you grew up in the golden era of the Broccoli produced Bond movies you did. In fact when I went “real” gun shopping in Texas that is the weapon I set out to get. But because it has to made in the US for that market, it’s not cheap averaging around $700.00 US dollars. That’s damned near $1,000 for us Canucks ... my wife would have killed me. So here we are with a very reasonably priced almost exact replica that shoots bb’s as fast as you can pull the trigger. Target shooting is all you can do with a pistol up here anyway right? I’ve shot this little gun more already than all my other guns combined. Great blow-back action and for a gun with a very short barrel, it’s pretty accurate at 30 feet (sorry, 10m). It feels right and it performs well. And for $95 dollars Canadian at Replica Air Guns... you should buy 2. In fact, I may just grab another one myself. Thanks again for your excellent service RAG.ca!
Was this review helpful to you?  0  0
Money Value
May 21, 2020

Excellent gun, feels extremely solid, excellent reproduction of the original PPK/S. The only complaint I have is the quality of the magazines which are relatively cheap-feeling plastic and not as easy to load as nicer, higher quality pistol magazines such as on the CP99. But the gun came with 3 mags total, and overall, I’m extremely happy with the purchase. And since the magazine only makes up a small portion of the bottom of the grip when loaded, the overall feel of the gun is still fabulous.
Was this review helpful to you?  0  0
11 to 20 of 30 reviews
Previous Page
Next Page