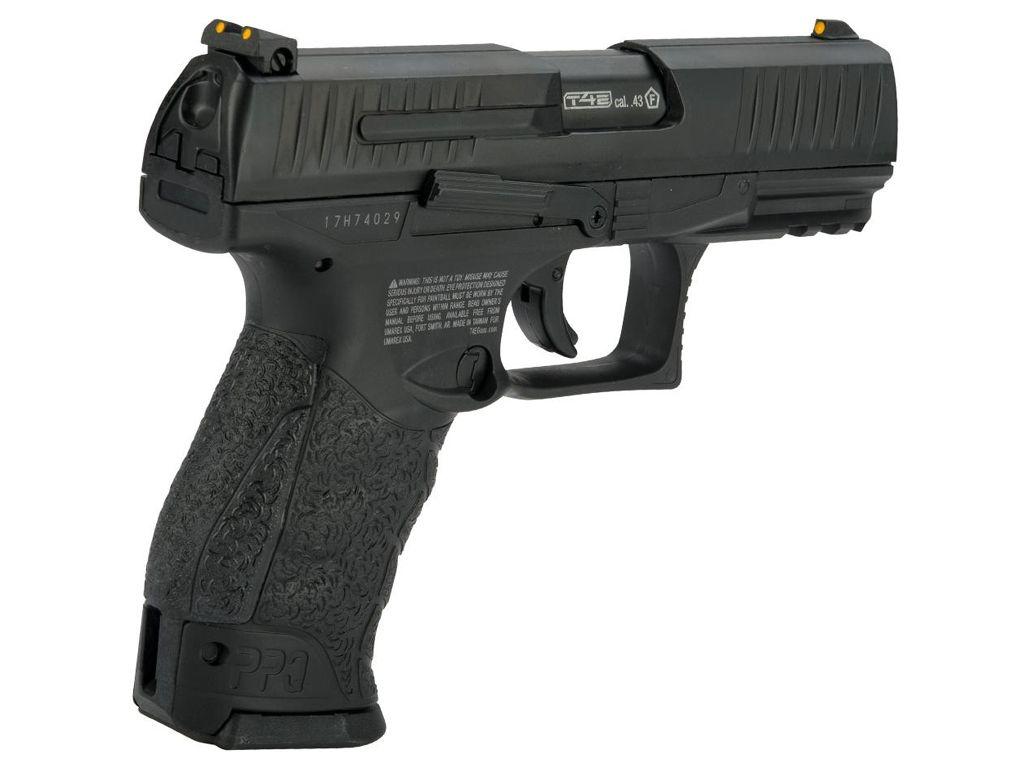 Trigger Pull: The trigger pull on Umarex Walther PPQ M2 .43 Cal. Paintball Pistol feels a lot like a double action trigger, internally it may be striker fired so expect a bit of a longer trigger pull with a fairly long reset and a medium strength trigger weight. There is also a working trigger safety which works well.

Build Quality: The build quality of the Umarex Walther PPQ M2 .43 Cal. Paintball Pistol is really very good, metal parts are where you would expect them, the slide, slide catch, barrel, magazine and most internal parts giving the Umarex Walther PPQ M2 .43 Cal. Paintball Pistol a nice near 2 pounds (1.87 pounds) of weight with the magazine in which makes the Paintball version a little heavier than the real still version (1.53 pounds) but once the real steal version is loaded with a full mag this may even out a bit. The Walther PPQ M2 does have a polymer frame but again this is normal with todays modern guns and helps keep the weight down. Fit and finish is also excellent.

Realism: The Umarex Walther PPQ M2 .43 Cal. Paintball Pistol is a near perfect replica of the real steel Walther PPQ M2, form the fully licensed markings to the large .43 caliber diameter barrel. If you placed the Paintball version side by side with the real steel version I doubt you could tell them apart? You will find that the slide cycle distance is a bit shorter than it should be meaning that when the side catch is engaged the slide does not go as far back as it should. Filed stopping the Walther PPQ M2 .43 Cal. Paintball Pistol may requires some tools.

· Full Metal slide that locks back on the last shot.

· All metal heavy full size drop out magazine adds some additional weight to the gun.

· Everything works pretty much like the real gun so a great training tool.

· Fit and finish is excellent.

· Trigger pull seems a bit long as it shoots like a double action trigger, may be striker fired internally?

· Magazine only holds 9 rounds, so you are going to need extras.

· Blowback action is not full blowback, more like a typical BB airgun.

Comments: I'm really glad to see another Replica Paintball Pistol available in Canada, especially such a well made and realistic version. The Umarex Walther PPQ M2 .43 Cal. Paintball Pistol looks to be perhaps the best to date .43 caliber Paintball gun on the market and may even prove to be an option for non-lethal personal defense when using rubber balls with it. Not that I would trust my life with it but it sure looks the part and I am sure most people would not want to be on the receiving end of 9 rounds coming at you. As a training tool and Paintball gun the Umarex Walther PPQ M2 .43 Cal. Paintball Pistol offers superb realism for this purpose.

Average Rating
Based on 9 rating(s)

Dindn't have a chance to try the nylon Balls ,but i like it a lot .. I tought i would be deceived with the Power but no...its really strong
Was this review helpful to you?  0  0
Money Value
Quality
Accuracy
Jul 03, 2020

This gun is boss. Everything about it is amazing. If you have the means, I highly recommend it.
Was this review helpful to you?  0  0
Money Value
Jun 03, 2020

Great realistic gun. Riot balls are powerful and fast
Was this review helpful to you?  0  0
Money Value
Quality
Accuracy
Apr 25, 2020

This is a very well made gun, quality is very high, heavy and feels real. When the c02 gets low the gun starts to jam however, or not load properly and sometimes the ammo rolls out the barrel, only when it's almost empty though. Also there is no reliable safety, the safety only works if the gun is cocked back and clip on the side engaged to hold the slide back, I wouldnt feel comfortable carrying this loaded for the fear that it might go off, at longer range over 150ft balls veer off to one direction, but I guess that is because of the large ammo size and the rubber balls are light, at close range its extremely powerful more than I expected, I guess depending on the ammo used the accuracy will fluctuate, all in all I gave it 4/5 because of this, still it's a fun shooter and I'm happy with it very realistic and awesome clip/blowback realism! Would reccomend to buy if these issues dont bother you
Was this review helpful to you?  0  0
Quality
Accuracy
Money Value
Feb 20, 2020

Like many of you I have watched Mike's videos being satisfied with the review I decided to buy one myself It's made very well and closely resembles my real Walther Creed the shipping for this was very quick. It got to me in about 4 days coming from Vancouver to Quebec
Was this review helpful to you?  0  0
Accuracy
Money Value
Quality
Nov 21, 2019

This gun is awesome it also shoots steel balls and glass balls the glass balls are light and come out fast and hard, for home defense i only use the glass balls
Was this review helpful to you?  0  0
Quality
Accuracy
Money Value
Aug 09, 2019

This Pistol does not disappoint. The fit & finish is top notch. this marker is very similar to my Walther CP99 which I love. this is my new favorite pistol. It has great kick back, and when you shoot it smoke comes out of the barrel. not sure why it does that but its very cool. so far i have only shot paintballs through it. but i do have some rubber ball ammo also. I want to try some riot balls as well. The gun has a metal slide and barrel with a polymer frame As always Michael & the crew from Replica Airguns always looks after what i need, with quality items, great prices and fast shipping
Was this review helpful to you?  0  0
Money Value
Jun 03, 2019

I love this gun. It shoots paintballs, rubber balls, riotballs, and pepper balls. Very accurate especially with the rubber balls. I thought they forgot the user manual but it was tucked behind the foam in the gun case, I wish they would have included the maintenance manual but I found that online. Be care when loading your clip, if you drop it on a hard surface you could find yourself purchasing another clip. Talking about ammo clips, you should purchase an extra one, especially if you are doing paintball. The clip only holds 8 balls and you are going to want to be able to reload quickly. If you want realism, this gun is for you. Now go out and have fun.
Was this review helpful to you?  0  0
Money Value
Quality
Accuracy
Jun 16, 2018

Great pistol but no manual.

This replica Walther PPQ M2 looks and feels good in your hand. The accuracy of this pistol from 7 to 15 yards is pretty good via target shooting with rubber training bullets. When training with rubber bullets change out the spring (paintball spring) to the rubber ball spring that is included in the case. The mag only holds 8 bullets not 9. The magazine will take Crossman or Daisy 12g CO2 which you can purchase for cheap Cabelas. The trigger safety hinders your ability to fire faster and that causes it to jam if you are firing really fast. The whole package does not come with an instruction manual or maintenance manual for cleaning or maintaining your pistol after the warranty which is the biggest reason why I give it 4 stars. 5 stars if they supplied a maintenance manual.
Was this review helpful to you?  0  0

It was fun to shoot the Umarex Walther PPQ M2 .43 Cal. Paintball Pistol for a change but really it was a lot like shooting one of my BB and Airsoft pistols, except in this case I was shooting .43 caliber rubber balls. I decided to not use paintballs inside my nice new Sea Can Indoor Airguns Shooting Range to keep things clean :)

First, I put three rounds through my Chrony Chronograph to see what the real world FPS would be, keep in mind I was using rubber balls rather than paintballs and the rubber balls are a little bit heavier than paintballs so this could bring the FPS down a bit compared to the lighter paintballs. Using a brand new CO2, the Umarex Walther PPQ M2 .43 Cal. Paintball Pistol average 316 FPS which was high than the claimed 290 FPS!

Read the rest of my full written review here:
https://www.replicaairguns.com/posts/2018/1/5/umarex-walther-ppq-m2-43-call-paintball-pistol-field-test-review

I'm really glad to see another Replica Paintball Pistol available in Canada, especially such a well made and realistic version. The Umarex Walther PPQ M2 .43 Cal. Paintball Pistol looks to be perhaps the best to date .43 caliber Paintball gun on the market and may even prove to be an option for non-lethal personal defense when using rubber balls with it. Not that I would trust my life with it but it sure looks the part and I am sure most people would not want to be on the receiving end of 9 rounds coming at you. As a training tool and Paintball gun the Umarex Walther PPQ M2 .43 Cal. Paintball Pistol offers superb realism for this purpose. I am looking forward to testing mine out shortly :)

Watch my RAP4 RAM X50 Review:
https://www.youtube.com/watch?v=FMrspTO6qTk
How are we doing? Give us feedback about this page.