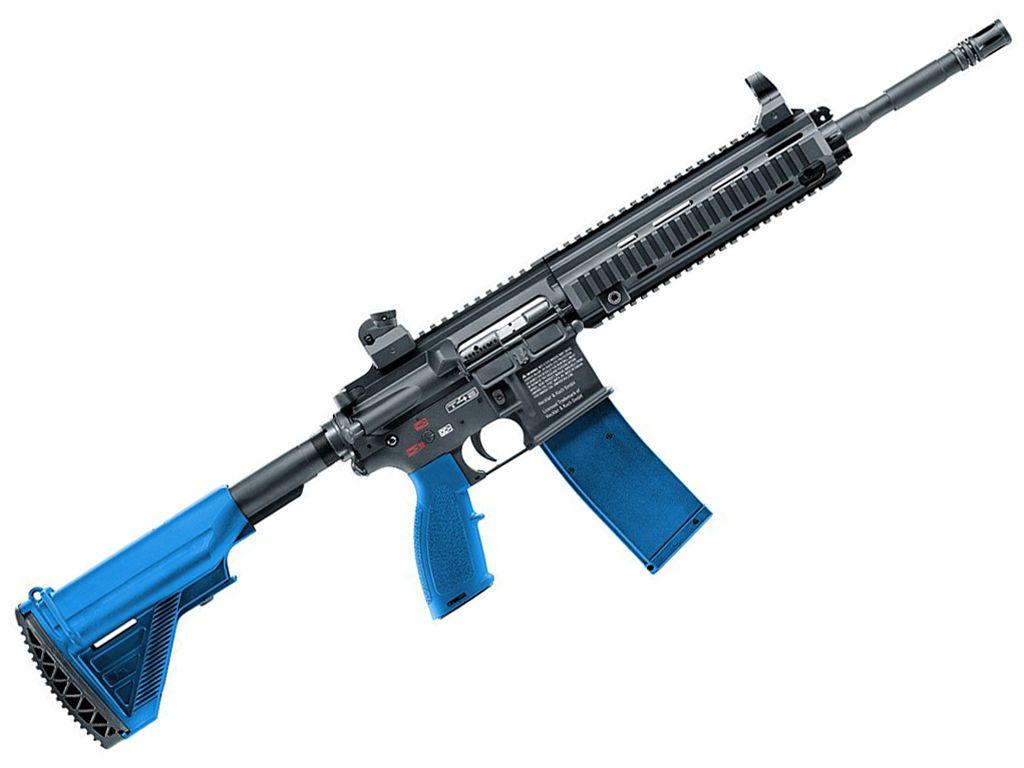 Trigger Pull: Pretty typical of what you would find on an AR styled rifle. Since the internal bolt cycles with each shot, the trigger is engaged and the paintball rifle is ready for the next shot with a very light and short single action trigger pull.

Accuracy: I shot a short string of rubber rounds through my chronograph and got a 280 FPS average with the Umarex T4E HK 416. This is plenty power for the intended target down range to feel the paintball effect without causing too much trauma. I then set up a paper target 30 feet down range and using a rested and seated shooting position and carefully unloaded the paintball rifle. I was surprised to see the rounds spread out a fair amount, perhaps as much as 10-12 inches but at least half were in the target rings.

Build Quality: Very good since this paintball gun is made for military and law enforcement training use. You’re going to find high quality metal and polymer where you would normally find them on the real steel version. The bolt carrier is expected to last at least 3000 shots but you do get an extra one included with it.

Realism: The fully licensed Umarex T4E HK 416 Training Marker Paintball Rifle is about as realistic as you are going to get in a paintball rifle. It’s basically made very similar to a GBB Airsoft Rifle of the same type with a working bolt and pretty much all working parts on it. You can even break the Umarex T4E T4E HK 416 Training Marker CO2 Paintball Rifle down into the lower and upper receiver halves. The bolt blowback action is not super strong but this may be a good thing since CO2 usage will be more efficient allowing for higher fps and more shots per CO2.

Comments: The T4E (Training for Engagement) HK 416 is so realistic, its used as a training weapon by law enforcement and the military! This .43 caliber air gun is a 1:1 scale replica of the Heckler & Koch HK416, with a full metal frame and bright blue polymer grip, telescopic stock, and drop out magazine. It fires .43 marking rounds at speeds approaching 460 FPS, accurate up to a range of 30ft. The CO2 system puts remarkably little stress on the gun’s internals. Although the bolt group will start to wear out after 3000 rounds, Umarex includes a free spare bolt group to swap in.

Nice out the box even better when you fit official HK furniture as it's milspec. It looks amazing with the all black OEM Heckler & Koch parts. An addition to the T4E line up. Perfect for CQB training. Fires anything from rubber/steel/nylon/PVC/dust/chalk/pepper/paintballs to homemade stuff that's .43. worth every penny. I would definitely buy another one just to pimp out.
Was this review helpful to you?  0  0
Accuracy
Money Value
Quality
Jun 08, 2020

This thing is sick!

I have this in all black from europe, its totally interchangeable and it shoots glass, steel, rubber, paint, pvc riot balls, pepper, rubber coated steel balls, glass balls are the best, hard and light get 11mm glass balls they fit perfect the rubber balls are a lil smaller making them less accurate and they hit hard!
Was this review helpful to you?  0  0

I don’t often make many Paintball Review Gun Videos let alone Shooting Videos so this one is a bit different than the norm. Lucky for me I have some .43 caliber Rubber Paintballs that I can use in my Indoor Sea Can Shooting Range so as not to make a mess of things. As per usual I like to use a brand new 12 Gram CO2 Cartridge for my testing and for your reference the temperature was right around room temperature or 21 degree Celsius, 69 degrees Fahrenheit.

I would not recommend the Umarex T4E HK 416 Training Marker CO2 Paintball Rifle as a long range paintball marker but it would be perfect for close quarters ultra realistic simulations. I would like to give actual .43 caliber paintballs a try outside to see if accuracy would be better, maybe the rubber balls grip the barrel a bit too much causing some random and unexpected spinning to occur? Either way the Umarex T4E HK 416 Training Marker CO2 Paintball Rifle is a really unique and fun Paintball Gun to shoot, maybe not for everyone but if you want the most realistic Paintball Marker then it would be a great option.

Buy the Umarex T4E HK 416 Training Marker CO2 Paintball Rifle in the US Replica Airguns Store:
https://www.replicaairguns.us/umarex-t4e-hk-416-43-cal-co2-paintball-rifle
How are we doing? Give us feedback about this page.