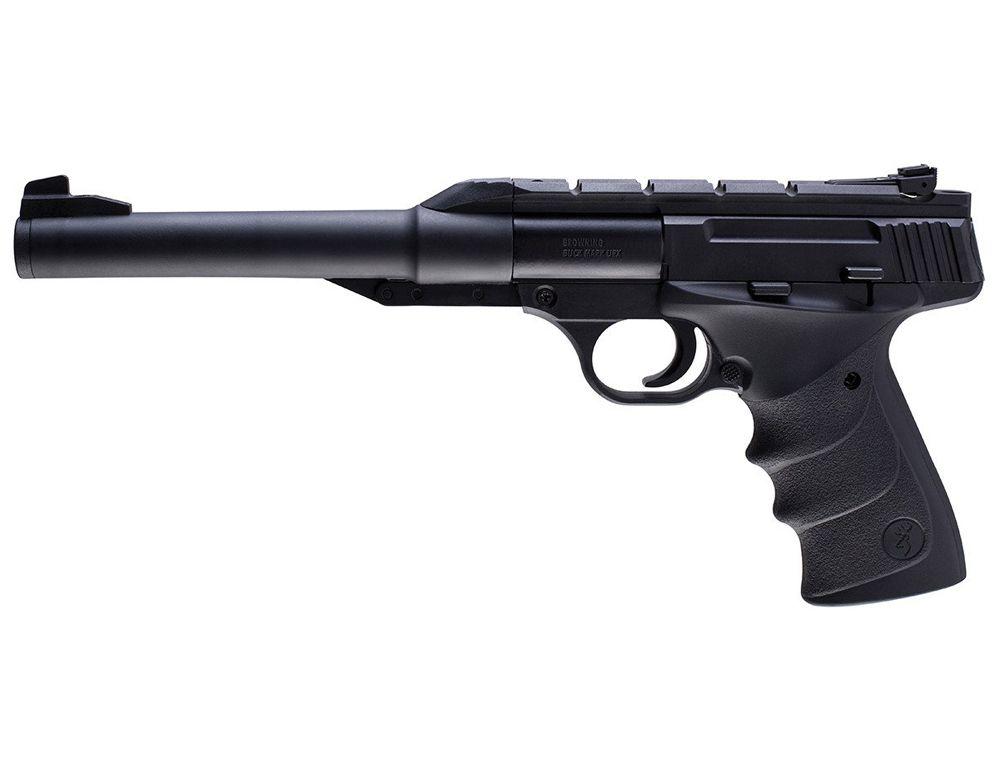 Trigger Pull: The trigger pull on the Umarex Browning Buck Mark URX is not too bad but I feel it is a bit heavier than the claimed 5.75 pounds. In comparison to my real steel 22LR Buck Mark, the trigger is much heavier but then again my 22LR trigger is what I would consider to be near perfection. I was able to work with the trigger as is but found I was expecting the trigger to release earlier than it actually did and I needed to apply just a bit more force than I would have liked to. Even so, with a bit of practice I was able to nail my shots.

Accuracy: Wow is all I can say, you will need to work with the Umarex Browning Buck Mark URX a bit to get used to where the trigger breaks but once you dial it in this airgun is a tac driver. I decided to go with a non-magnified NcSTAR Ultra Compact 1x25 Red/Green Dot Sight and found it worked well with this Buck Mark pellet shooter. From 30 feet out I was able to land 4 shots pretty much right on top of each other and ended up with an under 1 inch 5 shot group, and keep in mind that I was only using a standing but rested stance (non-braced).

Build Quality: Considering the very low price tag for this pellet shooting Buck Mark Replica, I was not expecting it to be as well constructed as it was, there is a decent amount of metal in the URX giving it a nice 1.5 pound heftiness to it and the rubberized grips make this air pistol feel much more expensive than it is. My only concern is the hinge area in the break barrel portion of the gun, once cocked there seems to be some play that could affect accuracy down the road when wear appears. Once locked back into the closed position the play is all but eliminated.

Realism: The Umarex Browning Buck Mark URX is a licensed replica of the actual Browning Buck Mark 22LR semi auto pistol. Umarex did a great job making this break barrel pistol look very close in most ways to the actual Browning Buck Mark URX with the exception of the lever required to cock the spring that is located just under the back of the barrel. The barrel itself is also a tad bit long but I am sure this helps when cocking to get a bit more leverage. When you consider this is a single shot break barrel pellet shooting version, it looks pretty authentic and most importantly it feels very similar to the real 22LR version which makes it a great off range alternative for 22LR Buck Mark owners.

Comments: I enjoyed this pistol review very much, this is the type of airgun you find hard to put down because it just performs so well and costs very little to shoot. Being a 22LR Buck Mark owner it was wonderful to see that Umarex made this gun very true to form, at least as much as they could considering the pellet shooting Browning Buck Mark URX is mechanically completely different to the 22LR version. The light cocking effort makes it great for just about anyone and the low recoil helps to keep your shots on target. I would recommend this break barrel pellet shooting Buck Mark replica to everyone. I seriously ca not think of any person that would not enjoy it ;)

Average Rating
Based on 21 rating(s)

Really nice grip, very comfortable and ambidextrous. It doesn't punch very hard but the accuracy is good and it is really quiet for a springer, so it makes a great plinker.
Was this review helpful to you?  0  0
Accuracy
Quality
Money Value
May 03, 2021

A great price for a great pistol

I got this as a gift but still managed to try it out. For the value, this thing is amazing. You don't need CO2 which is always a plus, however, this thing still bangs.
Was this review helpful to you?  0  0
Accuracy
Money Value
Quality
Mar 02, 2021

I was very impressed with the Browning Buck Mark URX. even though the fps is low this is a very accurate shooting pistol at even up to 10 yards. even more accurate when a red dot sight is installed. if your looking for a well made low cost break barrel air pistol that is accurate for shooting paper targets or plinking pop cans this is the air pistol for you. I do recommend to install a red dot sight as the iron sights do tend to shoot a little to the left even when the rear sight is adjusted all the way but this is not at all a deal breaker as red dot sights are very low cost now a days and very accurate and precise.
Was this review helpful to you?  0  0
Accuracy
Quality
Money Value
Feb 28, 2021

First off the Buck Mark we see here in 2021 is a step up in quality control as the earlier predecessors. I have owned 3 in total and they had cocking arm linkages too floppy etc. ... But this new version seems much tighter and shows in how easily I can get on with the platform and get on with the accurate shooting if you know how. What I mean is the pistol works and feels much better than it's humble price. To not buy one if you are a shooter is just weird. Happy pinking !! Thank You replica airguns !! Captain Air
Was this review helpful to you?  0  0
Money Value
Quality
Accuracy
Feb 26, 2021

Excellent ease of use an well built.
Was this review helpful to you?  0  0
Quality
Money Value
Accuracy
Aug 15, 2020

Another perfect addition to my large collection of replicas. Had now more than 1 yr. Still perfect, Tks.
Was this review helpful to you?  0  0
Money Value
Quality
Accuracy
Jul 21, 2020

Easy to cock and load. Very accurate. Nice Browning marks. A beautiful gun at a great price
Was this review helpful to you?  0  0
Accuracy
Money Value
Quality
Jun 27, 2020

I purchased this great little plinker because I am a huge fan of the Buckmark. This thing feels great in the hand with awesome rubberized grips. It's lightweight, easy to cock, and I really don't find the trigger all that heavy (and I have arthritic hands). So what I can say is that if you are looking for the most bang for your buck.... this is definitely the way to go. Very realistic, and super fun. I had mine dialed in within 4 shots. This thing hits wherever you're aiming. Can't beat that! So do yourself a favor and go on and get one. You won't be disappointed. Always remember, have fun and shoot safe!
Was this review helpful to you?  0  0
Quality
Accuracy
Money Value
Jun 19, 2020

Just got to try my new Buck Mark today very happy with it.
Was this review helpful to you?  0  0
Accuracy
Quality
Money Value
Jun 09, 2020

Excellent for the money

Very accurate, feels like the real Browning Buckmark .22lr pistol(which is why I got it, I like the real deal Browning Buckmark). Barrel locks up tight. Sights are decent, though I will be using high vis. paint on them. Slight downfall is how heavy the trigger pull is. Only complaint with my gun in particular is that sometimes the safety feels like it's stuck, and takes some major force to take the safety off. First time that happened, I thought I was going to break the safety, but finally just forced it, yet nothing broke. It happens every 5 or so shots I think. I've gotten used to it. I have put about 500 pellets through it already and still works great. For the price you pay, I'm super happy with it though.
Was this review helpful to you?  0  0