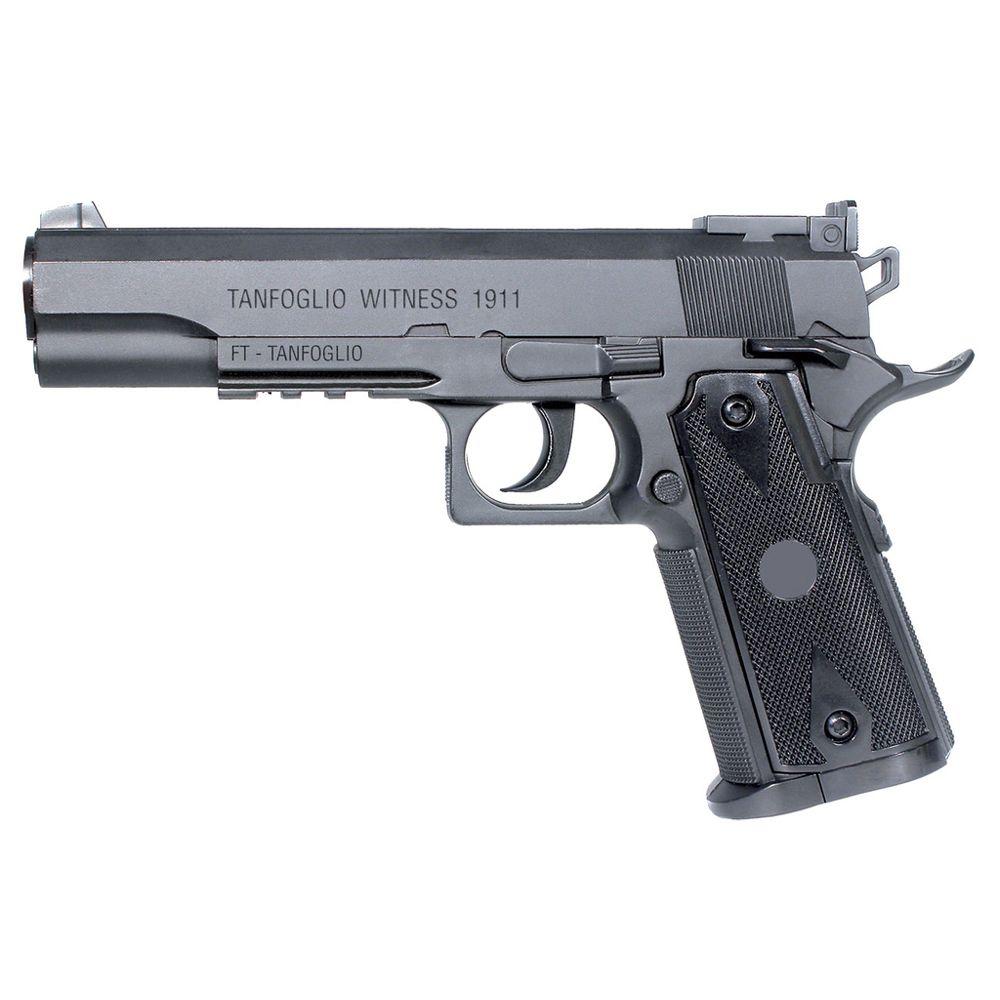 Trigger Pull: The Swiss Arms Sig Sauer GSR 1911 has a double action trigger with about a medium weight pull to it. It does feel somewhat long as the break point seems to take a while to get to but once you master where it is, you can shoot this BB gun with surprising accuracy.

Accuracy: Once I sorted out the laser sight which took some MacGyvering (as explained in the video), this gun shot a nice tight pattern! For my quick test I shot free standing from 20 feet away and put 8 rounds into my target taking my time. I got about a 1.5 inch group which was very good and another note worth mentioning would be the Chronograph results I got, even though the Sig Sauer GSR 1911 CO2 BB pistol has a claimed fps of 398, mine came in consistently right around 450 fps!

Build Quality: The Swiss Arms GSR 1911 is mostly plastic and has very few actual moving parts, I'm personally not too worried about it, in fact the lack of moving parts means there is less to go wrong with it! I found the fit and finish to be good overall and as long as you are OK with the plastic this gun should be just fine for you. The only thing that would have been nice to see improved would be the laser and how it is adjusted. As is out of the box without modification, you will find that it easily moves out of aim. (I do explain how I fixed this problem in my video review)

Realism: The Swiss Arms Sig Sauer GSR 1911 in terms of size and looks, is about what the real gun would look like, with the exception of the trigger which is kind of a strange looking combination of triggers mashed into one. Of course being a moulded plastic airgun, it is much lighter than the real steel 1911 and has the telltale screw holes on the right hand side. The magazine ejector does work but the real steel safety, slide catch/release, hammer and grip safety are all moulded into the plastic so they do not function. On a good note the barrel muzzle is large like a real 45 caliber adding to the realism.

Comments: The Swiss Arms Sig Sauer GSR 1911 is pretty much what you would expect from a low cost airgun in terms of build quality, lots of plastic, with less working parts. This does not take away from the performance however as the GSR 1911 performed well in both accuracy and power. It also comes with the laser sight, safety glasses and starter BB's as an added bonus for about the same price as many entry level airguns on their own. If you like ultra-realistic guns then this is on may not be for you, but if you want a good performer with the replica look and combined with a value package then I think you will be more than happy with the Swiss Arms Sig Sauer GSR 1911.

This is a table top review of the Swiss Arms Sig Sauer GSR 1911 CO2 BB pistol. I show you around the gun and walk you through its basic operation and handling. I will be following this Table Top Review up shortly with a Field Test Review and will update you with the Sig Suer GSR 1911's shooting performance, even though I cover this somewhat in this table top review.

The Swiss Arms Sig Sauer GSR 1911 is mostly plastic on the outside but has a some metal on the inside giving it a 1.3 pound overall weight. Along with good overall performance the GSR 1911 also comes with a laser, eye protection and some starter BB's all at a very affordable price so if you're looking for an economical air pistol with pretty much everything you need to get started and that has good performance, then make sure to watch this video review!

Buy this CO2 Airguns in the US Replica Airguns Store:
http://www.replicaairguns.com/buy-air-blank-guns-us/#ecwid:category=2215343&mode=category&offset=0&sort=normal

Check out the full Table Top Review on my website at:
http://www.replicaairguns.com/posts/2012/3/30/swiss-arms-sig-sauer-gsr-1911-co2-bb-pistol-table-top-review.html
How are we doing? Give us feedback about this page.