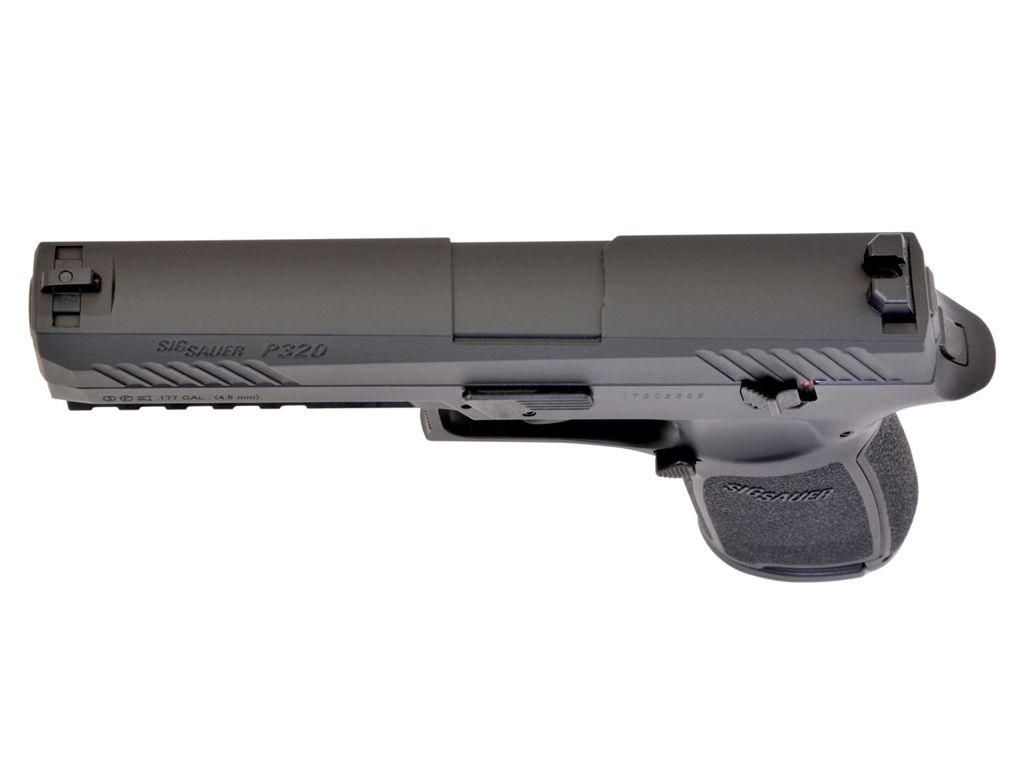 Trigger Pull: A lot better than I thought it was going to be considering each time you pull the trigger it has to advance the 30 round belt-fed magazine and cock the internal hammer since it's double action only. The blowback operation is only for show and feel since it does not cock the hammer for a single action type trigger pull. You can expect a fairly long trigger pull because it is double action only, but overall it's not too heavy.

Accuracy: The Sig ASP P320 came in at 405 FPS. It shot about 2 inch groupings with one or two outliers, most likely my fault. The Sig Sauer ASP P320 shot just a tad left on target but pretty close to the center.

Build Quality: The Sig Sauer ASP P320 is heavier than the P250, making the Sig Sauer P320 feel more solid in the hand. The P320 has a metal slide and polymer frame, similar to the real steel version which gives it realistic weight, balance, and handling. Sig claims that their entire ASP line of pellet guns is life tested for 15,000 shots so you know this gun is going to last and provide years of shooting fun. The fit and finish seem really good. So far, no real paint or finish problems and mechanically everything is operating as it should.

Realism: A very close replica of the real steel Sig Sauer P320. The hammer, slide catch release, and take-down lever are purely for show with the hammer being molded into the slide and frame. One slight disappointment for me is when a gun does not have a cut out ejection port, that is also the case with the other ASP Sig Sauer airguns like the P226 and P250, but it does not take away from the shooting fun in any way.

Comments: The Sig Sauer ASP P320 Pellet Pistol is a really nice evolution to the already existing line of Sig Sauer ASP Pellet Pistols. The 30 round belt-fed pellet magazine is what really sets it apart from the Sig ASP P250 and Sig ASP P226 which both share the traditional double-sided 8 round rotary pellet magazines found in other CO2 pellet pistols. At the end of the day, all three Sig ASP pellet guns performed about the same, but I have to say having 30 rounds at your disposal without having to reload or rotate the stick mag really makes the ASP P320 stand out and makes it the winner in a very close contest. Overall, the new Sig Sauer ASP P320 Pellet Pistol looks to be an upgrade to the P250 in terms of improved weight and a higher capacity magazine.

Average Rating
Based on 10 rating(s)

Get extra mags, too much fun

I bought four extra mags to go with this and it's a blast. Good solid feel to the gun, the weight and balance are very nice. Hits really hard, although it's not as accurate as some of my single shot guns, when you are sending this many pellets downrange those pop cans don't stand a chance. I haven't had any problems with jamming, and I get 80-90 shots from a CO2 cylinder
Was this review helpful to you?  0  0
Money Value
Quality
Accuracy
May 14, 2021

Seat pellets properly she runs round after round.
Was this review helpful to you?  0  0
Quality
Accuracy
Money Value
Apr 28, 2021

Great pellet pistol, more than worth the money
Was this review helpful to you?  0  0
Accuracy
Quality
Money Value
Apr 21, 2021

The overall quality is good and the blowback action feels great. But the magazine.... Lets say if I have to but another gun I would avoid belt feeding mags. Sometimes I can't go 2 or 3 shots without having to unjam whatever is going on. Still trying different pellets to this day. But believe me its really accurate. When you can shoot.
Was this review helpful to you?  0  0
Accuracy
Quality
Money Value
Apr 13, 2021

Pistol is very "Chunky" doesn't have a good feel Grip is very Large person with a smaller hand would have difficulty holding the pistol properly also the Safety is very hard to manipulate (Should be Slightly larger) Sig Sauer has many different models this one isn't their best design.
Was this review helpful to you?  0  0
Money Value
Accuracy
Quality
Feb 23, 2021

ship fast very good quality made in japan great kick of blowback and good handling
Was this review helpful to you?  0  0
Accuracy
Money Value
Quality
Aug 05, 2020

Very pleased with the service thanks.
Was this review helpful to you?  0  0
Accuracy
Money Value
Quality
May 19, 2020

Has a really nice feel. The cover for the CO2 cartridge could fasten more securely but other than that it shoots well and is very accurate especially for having fixed sites
Was this review helpful to you?  0  0
Money Value
Apr 14, 2020

Good weight, life like, quite accurate. Good value for the money.
Was this review helpful to you?  0  0
Accuracy
Money Value
Quality
Jan 29, 2020

Not happy with this gun

I bought this with 3 other bb guns from this site (which I love) the glock GPUMX2255202, M&P GPUMX2255053, and Uzi GPKWCKMB-07HN. All three were almost perfect replicas, great value and look and feel real. This one fell short in all areas. Although it is blowback it feels cheap, doesn't have a notch in the slide for the ejection port like the others do. For similar price as the others I would not buy again. Its comparable to a $50 gun I have. A+++++ for the site thought!
Was this review helpful to you?  1  0

The big question I had was how is the trigger going to feel and is a 30 round belt magazine going to be reliable? Will other aspects of the Sig Sauer ASP P320 CO2 Blowback .177 Caliber Pellet Pistol function and perform like its rotary magazine brothers?

So I figured I would put the Sig Sauer ASP P320 CO2 Blowback .177 Caliber Pellet Pistol up against both the Sig ASP P250 and P226 and see how they all faired against each other.

Buy the Sig Sauer ASP P320 Pellet Pistol in the US Store:
https://www.replicaairguns.us/sig-sauer-p320-30rd-4-5mm-pellet-pistol

I was happy when Sig Sauer released their ASP Sig P250 and P226 CO2 Blowback Pellet Pistols with their 16 round double sided stick magazines like we have seen in several otters CO2 Pellet Pistols. But I love the introduction of the 30 round belt fed magazine. I am hoping the belt fed magazine performs while actually shooting pellets as good as it feels when dry firing it, I guess we will have to wait and see when I do my Field Test Shooting Video :) Overall the new Sig Sauer ASP P320 Pellet Pistol looks to be an upgrade of sure to the P250 in terms of improved weight and a higher capacity magazine.

Read my entire written Review with additional photos over at ReplicaAirguns.com:
http://www.replicaairguns.com/posts/2017/6/2/sig-sauer-asp-p320-co2-blowback-177-caliber-pellet-pistol-table-top-review

Buy the Sig Sauer ASP P320 Pellet Pistol in the US Store:
https://www.replicaairguns.us/sig-sauer-p320-30rd-4-5mm-pellet-pistol
How are we doing? Give us feedback about this page.