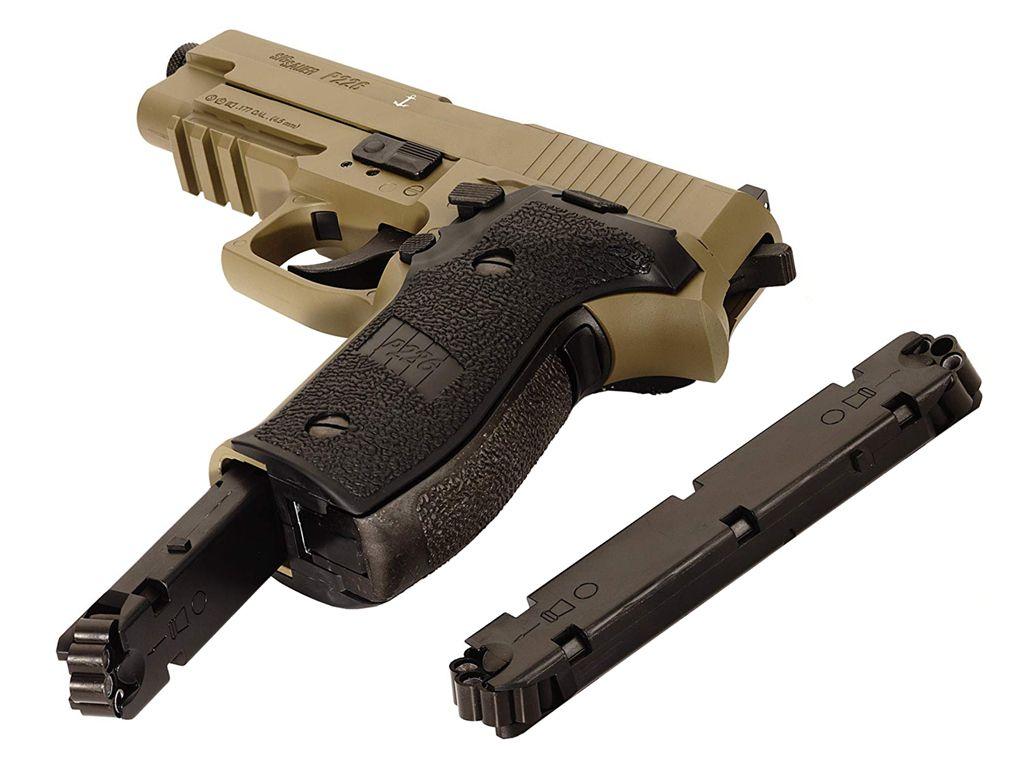 Trigger Pull: A lot better than I thought it was going to be. The blowback operation does place the hammer in the cocked position for single action type shooting, but the the trigger is still required to index or advance the next pellet to line up with the barrel. Because of this, the trigger pull is full length even in single action mode, but you can barely feel any added friction from the indexing of the rotary magazine. All of this makes for a slightly longer trigger pull, but one that is lightweight with a fairly nice and easy release.

Accuracy: I have not done my official field test shooting, but I can say that Sig has already done some of the work for me and conducted their own "real world" velocity testing for their ASP line of CO2 pellet guns. Sig tested both a standard 8.18 grain lead pellet and a high velocity 5.25 grain alloy pellet, shooting an 8 shot string with each to find out average FPS performance for both pellet types. The 8.18 grain lead pellet averaged 359 FPS while the 5.25 grain alloy pellet averaged 403 FPS. In terms of accuracy, I was able to get about a 2 inch 16 shot grouping on two separate 30 feet distance tests, which is pretty decent. I did notice that when shooting a 16 shot string, the first and last shot velocity will vary a fair amount, as the CO2 cools the gun and lowers the FPS. I would recommend taking your time in-between reloads to let the pistol warm back up.

Build Quality: A very solid feeling pistol with its all metal construction. Weighing at 2.35 pounds, it is actually a tad bit heavier then the real steel version. Sig claims that their entire APS line of pellet guns is life tested for 15,000 shots, so you know this gun is going to last and provide years of shooting fun. The fit and finish seems really good. So far no real paint or finish problems and mechanically everything is operating as it should.

Realism: The Sig Sauer ASP P226 Pellet Pistol is a very close replica of the real steel Sig Sauer P226. I would say it most closely takes after the MK-25 threaded barrel version. I really like the fact that the safety also works as a working decocker, just as it would on the real P226. Other similar working parts are the magazine release and the hammer that stays back for true single action shooting. The slide catch release and take down lever are purely for show but they are not molded in so they look the part. One slight disappointment for me is when a gun does not have a cut out ejection port. That is the case with both the Sig Sauer ASP P226 and P250 but it does not take away from the shooting fun in any way.

Comments: What I really like about the Sig Sauer ASP P226 is that like all the other APS airguns from Sig, it is a product that Sig has decided to invest a lot of their time and effort to develop, rather then simply grab an existing arigun product from a manufacturer and slap their license on it. Sig's product ingenuity is what will help to improve the airgun industry overall. Getting back to the ASP P226, it's a really solid CO2 pellet pistol that's a lot of fun to shoot. For Sig Sauer P226 owners, the pellet shooting airgun version offers an economical and safe way to get some practice in using a product that looks, feels, and shoots similarly to their real steel counterpart.

Average Rating
Based on 8 rating(s)

love the gun ..but the gun doesnt last long ..it falls apart slowly.sad because its feels soo great and shoots straight in the bullseye
Was this review helpful to you?  0  0
Money Value
May 25, 2020

Shoots as good as it looks!

Bought it to be a looker, got a shooter and a looker! Shoots great! Accurate out of the box. (Comes in a nice box, not plastic wrap) The blowback is super snappy, yet seems efficient. Shoots nice and hard with zero issues. Your gonna wanna order some extra magazines because you won’t want to put it down once you start shooting. Has a realistic weight, threaded barrel for a mock suppressor, and the coolest co2 tightening mechanism ever. Can change co2 in about 15 seconds with oiling it! No Allen key involved! I really can’t say enough good things about it!
Was this review helpful to you?  0  0
Money Value
Apr 27, 2020

I am so very happy with this gun!! Feels like the real thing! If my eyes were closed and I had this gun or the real one in my hand I could not tell the difference, even with my eyes open it’s hard to tell except for the ejection port being permanently closed this is a very nice piece. I have found it’s accuracy be spot on as well. It’s easy to maintain a 1-2” grouping at 30 feet. I’m not too sure if it hits the 480 fps it claims but it is consistent in velocity if you give a second or two between squeezing the trigger. I have been able to average 4 magazines (top and bottom) before I notice the performance of the CO2 start to drop off which is pretty good for a full blowback pistol. I’m very happy with this! Even my wife who had no interest whatsoever in target shooting Took a shine to it and now enjoys it as much as I do!
Was this review helpful to you?  0  0
Accuracy
Quality
Money Value
Apr 07, 2020

Fun is to come!

Pretty cool. Realism is awesome. It is heavy and solid. Just be careful with the choice of pellets, they seems to be models that doesn't fit.
Was this review helpful to you?  0  0
Quality
Accuracy
Money Value
Nov 12, 2019

Great looks... But that is about it. Very pretty on the outside, very boring on the inside... The gun feels heavy in the hand, solid and all until you move your hand or play with the slide and controls. The barrel and the slide both have a bit of play, little too much for a SIG I think (There are youtube videos out there showing how you can modify it to alleviate the problem) If you move the gun from side to side, you will hear the components rattle a bit. The most disconcerting thing is the sound the slide makes when it returns from its trip to the back. It hits the stop with a hollow ''klunk'' that makes it sound like a toy instead of a steel gun. Like hitting a tool on a hollow pipe... It is so weird for a SIG to do that, try as I might I cannot get used to it. It almost feels like the slide return spring is too soft. PROS: Shoots very well, reasonable accuracy (2'' group at 10 meters without too much trouble). Hefty blow back. Chunky feel in hand. CONS: Barrel and slide play is a little too much for a SIG. I agree with replicaairguns.ca, the lack of an ejection port cut out is not helping this gun. And the sound it makes... Very toy like. A bit CO2 hungry. Shooting at 22 C room temperature, I was able to do about 40 pellets before it dropped pressure. But it is blowback so that is the nature of the beast. One last thing: The safety is very close to the mag release so sometimes as you try to release the safety with your thumb (you will fail until it is properly broken in), you can eject the mag by mistake. CONCLUSION: At this price point, it is understandable SIG is cutting corners (slide tolerance, no ejection port cut out, dummy slide lock, dummy catch for striping) but then it is no longer really a SIG right? I hope SIG comes out with a better version of this gun because it has a very sexy look, feels good in the hand and has a nice kick.
Was this review helpful to you?  1  0
Money Value
May 12, 2019

Really nice quality accurate upto 100 feet, powerful quick blowback kick, i dont wana be on other end of it with new bottle of gas in no way
Was this review helpful to you?  1  0

What I really like about the Sig Sauer ASP P226 CO2 Blowback .177 Caliber Pellet Pistol is that like all the other APS airguns from Sig, it is a product that Sig has decided to invest a lot of their time and effort to develop rather then simply grab an existing arigun product form a manufacturer and slap their license on it. Sigs product ingenuity is what will help to improve the airgun industry overall. Getting back to the Sig Sauer ASP P226 CO2 Blowback .177 Caliber Pellet Pistol, it's a really solid CO2 Pellet pistol that is a lot of fun to shoot and for Sig Sauer P226 owners, the pellet shooting airgun version offers a super economical and safe way to get some practice in using a product that looks, feels and shoots similarly to their real steel counterpart.

Read my entire written preview with additional photos over at ReplicaAirguns.com:
http://www.replicaairguns.com/posts/2016/7/14/sig-sauer-asp-p226-co2-blowback-177-caliber-pellet-pistol-ta.html

Buy Airguns in the US Store:
http://www.replicaairguns.com/buy-air-blank-guns-us/

This video is a bit like an unboxing and preview video combined, I don't go into a lot of detail or talk specifications much but I do show you around both the Sig Sauer ASP P226 and Sig Sauer ASP P250 nice and close and in detail. I will be making a future Table Top and Shooting Video for these fine Sig Air Pistols which are both CO2 operated, have blowback operation, shoot in both single and double action, shoot lead or alloy pellets using a 16 round double sided rotary stick styled magazine, shoot around 400 fps and feature Sig Sauer licensing all around.

Read my entire written preview with additional photos over at ReplicaAirguns.com:
http://www.replicaairguns.com/posts/2016/7/7/sig-sauer-p226-and-p250-co2-blowback-177-caliber-pellet-pist.html

Buy Airguns in the US Replica Airguns Store:
http://www.replicaairguns.com/buy-air-blank-guns-us/
How are we doing? Give us feedback about this page.