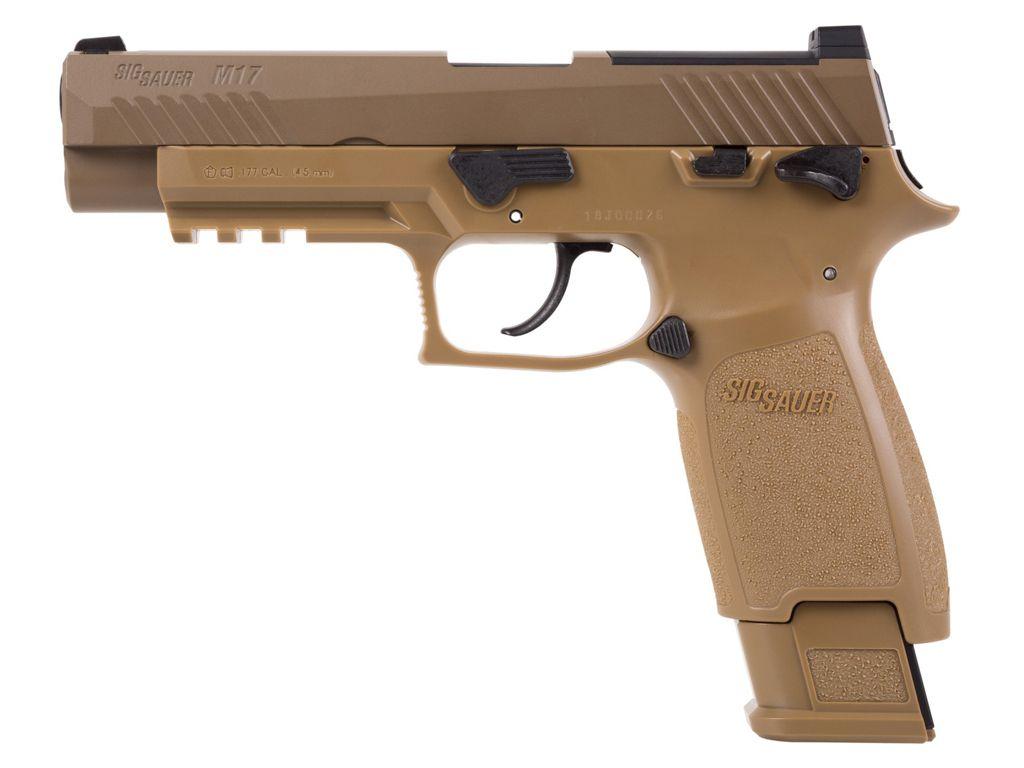 Trigger Pull: The trigger pull on the Sig Sauer M17 ASP CO2 Blowback Pellet Pistol is actually very good considering the trigger not only cocks the hammer with each shot but it also has to index the 20 round belt fed magazine. All of this is done only using around 6 pounds of trigger pull. You will find the trigger pull to be a bit long because of this but overall it feels pretty good and will allow for fairly fast rapid fire action shooting.

Accuracy: So far I have not done my official Field Test Shooting Video for the Sig Sauer M17 ASP CO2 Blowback Pellet Pistol but plan on making it shortly. I did hover get a chance to load some CO2 and Sig Sauer Led Pellets into my Sig Sauer M17 ASP CO2 Blowback Pellet Pistol and so far fired two fully loaded magazines which is 40 rounds. So far so good, no misfires or jams and power can accuracy seemed nice and consistent. The blowback action is scrips and snappy!

Build Quality: As with all the Sig Sauer ASP Airguns, the qualify is very good. Sig does not actually make these guns but has full control over the design and manufacturing of them. The actual airguns are made in Japan for Sig Sauer but this OK since Sig is not really an Airgun manufacturer and so levying that part to a company that is is not a bad idea. The fit and finish on the Sig Sauer M17 ASP CO2 Blowback Pellet Pistol is top notch. There is lots of metal in the Sig Sauer M17 ASP CO2 Blowback Pellet Pistol similar to where you would find it in the real steel version.

Realism: The Sig Sauer M17 ASP CO2 Blowback Pellet Pistol is a very close replica of the real steel Sig Sauer M17. Even the slight difference in color between the slide and frame has been recreated on the Airgun version as compared to the real steel Military version. Sig has made this new ASP Airgun even more realistic by giving it an open ejection port, a recessed barrel, a full size drop out magazine that holds the CO2 and belt magazine, and Sig even made the M17 ASP field strippable!

Comments: I really like what Sig Sauer is doing for airgun community. What I mean by this is that rather than simply slapping their License on an already existing airgun like many other companies tend to do, Sig instead has decided to create something new and fresh. Sig Sauer has in brought new advancements and deigns to their APS Airgun line that nobody els so far has been able to do and with each new ASP Airgun Sig Sauer has improved upon their designs always staving to be better than the previous version. That’s exactly what the Sig Sauer M17 ASP CO2 Blowback Pellet Pistol is to me, Sigs best ASP Air Pistol to date!

Average Rating
Based on 21 rating(s)

REALLY LIKE THIS GUN, I HAVE SEEN A FEW REVIEWS ON IT,ABOUT JAMMED PELLETS AND MISFIRES AND SHOOTING LOW. I HAVE JUST PUT OVER 600 PELLETS ON TARGET WITH OUT ANY TROUBLE WHAT SO EVER . I DID DO THE MODS. AND LUBS TO SLIDE, INNER BARREL AND MAGS, JUST NEED TO TIGHTEN UP THE BARREL AT FRONT OF SLIDE. A GREAT GUN VERY GOOD BUY THANKS WAYNE N.
Was this review helpful to you?  0  0
Quality
Money Value
Accuracy
Mar 10, 2021

It’s alright but it’s not worth the price

I’ve had no issues with this gun this works well it does what is meant to but as of the reviews of stated it does not shoot accurately 20 yards you can’t make a grouping you’re just spraying basically but it’s a decent air pistol mechanically but other than not there are better performing guns for a better price
Was this review helpful to you?  0  0
Quality
Accuracy
Money Value
Feb 05, 2021
Certified buyer

Great looking, but not so good performance.

Bought this M17 about a week ago. While it looks fantastic, feels good in the hand, and has an innovative CO2 loading mechanism, it doesn't deliver on many other points. First, it fails on the FPS side of things. Sig Sauer claims up to 430 FPS, but the best I could come up with is about 390 (with very light pellets, and warming up the CO2 with a hairdryer). Also, the number of available (useful) shots per CO2 cartridge is rather low (3 mags of 20 pellets at most). Blowback slide doesn't cock the internal hammer, so double-action trigger only. Speaking of which, the trigger feels terrible. Notchy and stiff. The slide doesn't lock back on an empty magazine. The sights are non-adjustable and my airgun shoots really low (6 inches too low at 30 feet). Luckily there's a rail, so I've installed a laser which helps a lot. Then, the grouping is not too bad, but nothing to write home about. Haven't had a failure with it so far (about 200 shots). So, a bit on the expensive side for what it offers. Would not recommend getting it.
Was this review helpful to you?  0  0
Accuracy
Money Value
Quality
Jan 28, 2021

I bought it last month as I saw many positive reviews about it on internet. However, maybe I had bad luck, the magazine starts to leak gas from the top after I shot around 200 rounds. Also I am not satisfied with the accuracy. By the way, I used 7g pellets, the average muzzle speed was 330(be honest, I am not happy with it).
Was this review helpful to you?  0  0
Money Value
Quality
Accuracy
Jan 12, 2021
Certified buyer

One of my best pellet guns. It's big, heavy solid, accurate, easy and fun to use. Recommend very much. Good on CO2. You can shoot a lot with this one. My hand goes for this one first and I have 5 handguns.
Was this review helpful to you?  0  0
Quality
Money Value
Accuracy
Dec 01, 2020

I got a problem with CO2 value right away after only one time of use. Iron sight is not accurate at all. It shoots low. You feel the plastic all around and it doesn't give you a real gun impression. Finally, it's not worth the money at all.
Was this review helpful to you?  0  0
Money Value
Quality
Accuracy
Nov 25, 2020

Very pleased with the pistol. Only comment is the the slide is a bit loose. The sights are also a bit off and fixed. Recommend that you invest in a laser sight.
Was this review helpful to you?  0  0
Quality
Money Value
Accuracy
Sep 24, 2020

Very happy with the pistol. Surprised at the number of shots per CO2 cylinder. Would have liked to have had better accuracy with the fixed sites but a laser attachment will remedy the situation.
Was this review helpful to you?  0  0
Money Value
Sep 17, 2020
Certified buyer

A lot. Certainly more than I thought I would. I have been reading a lot of reviews about it and most of them weren’t that great. Watched pretty much all the reviews I could find on YouTube and they were quite mixed what with the military contract there was a lot of hype being questioned. It does not exactly fit the profile of the type of replica I want, lock up after last shot is huge for me as well as the blowback returning the trigger to single action but I needed a new pellet shooting revolver as my Sig X5 finally gave it up for good and the Gamo p85 with that ridiculous beretta p4 16 shot magazine doesn’t do it for me so I took the leap and grabbed this SIG. So far so good. Shoots all 20 pellets every time something I rarely coaxed out of the X5 and that magazine is awesome. I though there would be large co2 loss changing the pellet belt but no and it’s a nice gun to shoot. The features it does have are very well done and the weight and feel are very nice. The first time I held it I thought to myself “it’s like they designed it for my hand” so yes, it’s all good.
Was this review helpful to you?  0  0

What we also like to know about most of the airguns I get my hands on is how do they perform in the real world? Do they get close to the claimed fps? Will the shoot a nice tight grouping on target? How does the blowback operation and the trigger feel?

Well that’s what this Field Test Shooting video for the Sig Sauer M17 ASP CO2 Blowback Pellet Pistol is all about so let’s get started.

First I like to perform my Chronograph “Power” test where I shoot 5 pellets through my chronograph using a brand new CO2 of course. Since Sig Sauer sent me a tin of their Sig Sauer Match Pb Precision Wadcutter Lead Pellets, I figured I would use them with my Sig Sauer M17 ASP CO2 Blowback Pellet Pistol. These pellets are 8.18 grain so not the lower weight Alloy pellets most companies use to get their higher fps rating that you usually see on the box. In other words I was not expecting to get the claimed 430 fps since that would be using a much lighter Alloy pellets that would weigh at least 3 grain lighter than the pellets I was using during this FPS test. All of that to tell you I got an average of 280 fps using the 8.18 grain lead pellets. And if you where wondering the temperature in my Sea Can Indoor Airgun Range was about 17-18 degrees Celsius (about 62 degrees Fahrenheit).

Read my entire written Review with additional photos over at ReplicaAirguns.com:
https://www.replicaairguns.com/posts/2019/1/10/sig-sauer-m17-asp-co2-blowback-pellet-pistol-field-test-review

Buy Sig Airguns in the US Replica Airguns Store:
https://www.replicaairguns.us/search?q=Sig+Sauer

I really like what Sig Sauer is doing for airgun community. What I mean by this is that rather than simply slapping their License on an already existing airgun like many other companies tend to do, Sig instead has decided to create something new and fresh. Sig Sauer has in brought new advancements and deigns to their APS Airgun line that nobody els so far has been able to do and with each new ASP Airgun Sig Sauer has improved upon their designs always staving to be better than the previous version. That’s exactly what the Sig Sauer M17 ASP CO2 Blowback Pellet Pistol is to me, Sigs best ASP Air Pistol to date!

Read my entire written Review with additional photos over at ReplicaAirguns.com:
https://www.replicaairguns.com/posts/2018/12/29/sig-sauer-m17-asp-co2-blowback-pellet-pistol-table-top-review

Buy Sig Airguns in the US Replica Airguns Store:
https://www.replicaairguns.us/sig-sauer-guns

I purchased my Umarex Magnum Research Desert Eagle .177 Cal. CO2 Blowback Pellet Pistol around 10 years ago but it has been on the market since I believe 2006 and was the first pellet firing blowback CO2 Air Pistol. It’s a mostly plastic exterior Airgun but still has some good weight to it and compared to today CO2 Blowback Pellets Pistols it actually performs just as well if not even better as my Complete Field Test Shooting Video demonstrates.

Read the rest of my written review:
https://www.replicaairguns.com/posts/2020/12/11/umarex-desert-eagle-177-cal-co2-blowback-pellet-pistol-field-test-review

Buy the Umarex SA10 CO2 Blowback Pellet Pistol:
https://www.replicaairguns.ca/sa10-co2-blowback-dual-ammo-pistol
How are we doing? Give us feedback about this page.