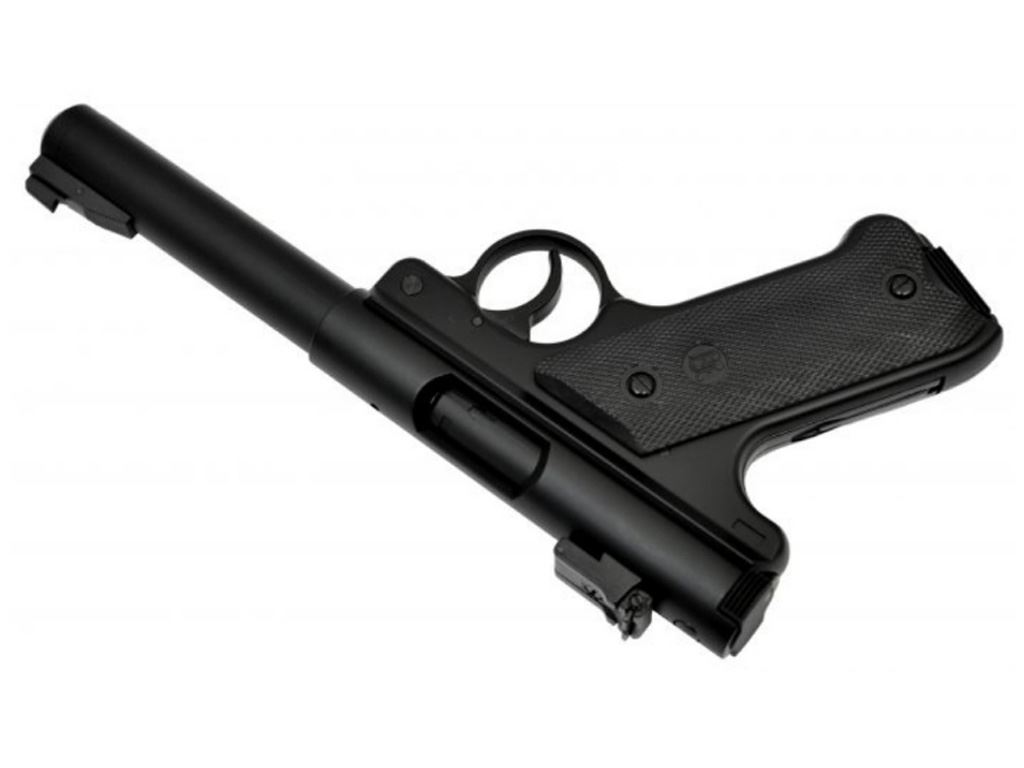 One of the most popular sidearm choices by airsoft combatants, the KJ Works MK1 Gas Non Blowback Airsoft pistol because it is simple to navigate with on the battlefield. A player might even forget they are wearing a sidearm due to its lightweight design, however, looks are deceiving. This weapon fires at an astonishing 400 feet per second when using 0.20 pellets although it is very capable of shooting heavier ammunition. The MK1 boasts a sturdy metal internal parts with a heavy duty ABS plastic frame. An excellent choice for a sidearm that is light but strong enough to surprise your opponents on the battlefield.

The KJ Mk1 is the great gun for reliability, quality, performance, and practicality. Beautiful and realistic, this very powerful non-blowback pistol optimal for skirmishing.A large plume of gas discharges from the barrel with each shot. The magazine holds 16 rounds. Velocities range from 370-398 fps as tested by our Tech department. The KJ Work MK 1 is one of our lowest priced gas non-blowback pistols. An excellent value considering its 390 fps velocity.

Type: Airsoft gas pistol. Manufacturer: ASG. Model: Ruger MK1. Materials: Mostly plastic with some metal parts. Weight: 1.2 pounds (550 Grams) Barrel: Metal non-rifled. Propulsion: Gas (Propane or Green Gas). Action: Semi auto double action only. Ammunition Type: 6mm plastic Airsoft BB's. Ammunition Capacity: 17 round full size drop out metal magazine. FPS: 328+ (Have heard it is much more). I think it may come down to how this ASG Ruger MK 1 Airsoft Pistol performs before I can give it my total thumbs up, I really wish it had a single action trigger but for a double action trigger it feels pretty good and I love the sounds of the internal hammer dropping. The fully adjustable sights mean that if this gun performs well in terms of accuracy then being able to dial it in to the bulls-eye will make it that much more enjoyable to shoot. Overall I like this pistol, the ergonomics are exactly like the real Ruger Mark III and even though much of the external build is plastic, it still has a good weight to it due to the all metal magazine and other internal metal parts. Read full article here: https://www.replicaairguns.com/2013/9/21/asg-ruger-mk-1-gas-6mm Buy Replica Airguns in Canada: https://www.replicaairguns.ca/ Buy Replica Airguns in the US: https://www.replicaairguns.us/