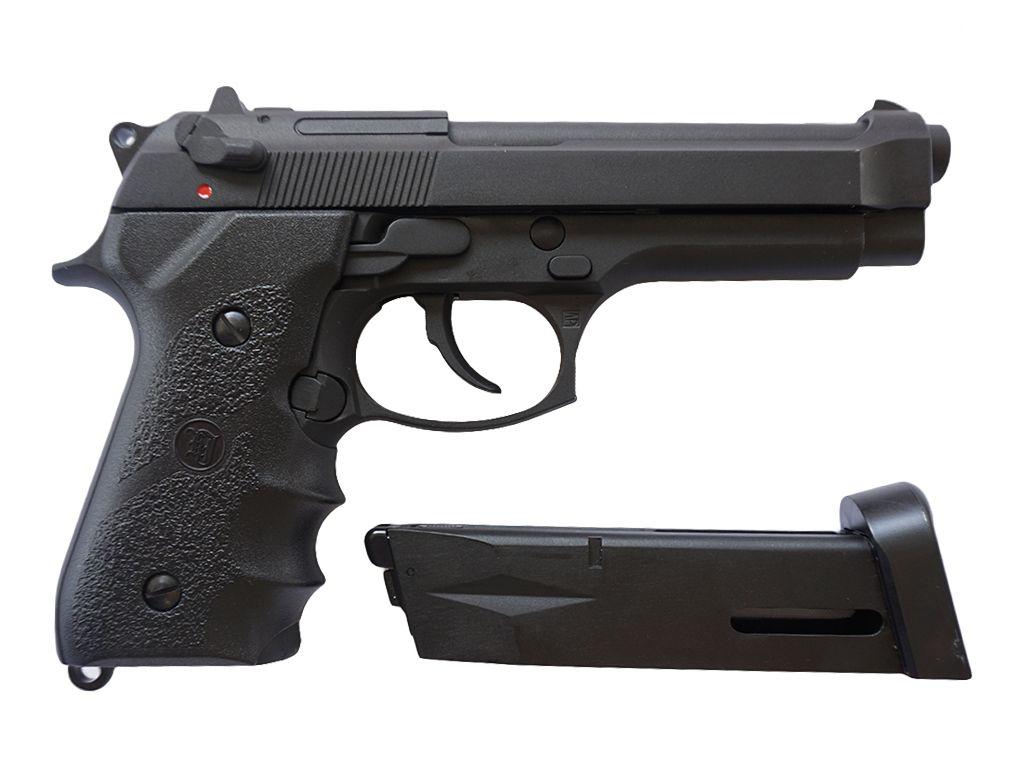 Trigger Pull: The trigger pull on the KJ Works Beretta M9 & M9A1 are very good in both single and double action. Double action is a bit longer and heavier than when shooting in single action but not heavy by any means. Single action shooting is short, light and crisp as you would expect when shooting a real steel Beretta 92 style pistol.

Accuracy:I have not done my actual Field Test Shooting video review for the KJ Works M9 and M9A1 airsoft pistols but I did get the chance to make a short preview video where I shot both guns at some clay pigeons setup around 20 feet away. I was able to pop the center out of the clay pigeons no problem and found that even without any practice I was consistently hitting dead center on most shots. I am not sure exactly what the FPS will be but considering both these versions of the KJ Works M9 and M9A1 have the CO2 mags they should shoot up into the 360+ FPS range using .20 gram airsoft BBs. Blowback operation is strong and the slides cycle full length. Keep posted for my upcoming Field Test Shooting Video for both pistols.

Build Quality: As expected, the KJ Works M9 and M9A1 build quality is just like all the other KJ Works airsoft guns I've tested so far. The fit and finish is the best in my opinion even when compared to my 4.5mm steel BB shooters. When using these guns regularly, areas that are painted like the metal friction areas show very light wear which is rarely the case with metal built blowback airguns. Again the tolerances between the moving parts, like the slide and frame, are very tight and show excellent workmanship and machining from KJ Works.

Realism: Both the KJ Works M9 and M9A1 are copies of the real steel popular Beretta M9 and M9A1, it is really hard to tell them apart from the real versions. Both the M9 and M9A1 are very similar in design with the M9A1 having some slight cosmetic differences, the biggest being the addition of a tactical rail built into the frame. Both KJ Works Berettas can be field stripped in the same manner as a real Beretta M9 Semi Auto pistol and all parts function the same.

Comments: The KJ Works Full Metal M9 and M9A1 are yet more examples of excellent full-blowback airsoft pistols from KJ Works. They are built to very high standards, are near perfect replicas of the real steel Beretta M9 and M9A1 and performance is also excellent. Yes the price is slightly higher than a similar airsoft gun from KWC but the quality on the KJ Works is definitely worth the extra cost.

I bought this pistol thinking initially it was of the M9 Beretta Brigadier model with the tactical handgrip with the unique finger grooves. However, when I got the pistol it was just the original 92FS version with the regular grips. On top of that, when I ordered this gun, I bought it as a CO2 model however it came as a green gas model too which was very strange. Although I got this sorted out with replica airguns and hopefully they send me my free CO2 magazine soon that I was promised. Overall it is a good pistol and full metal, matte black finish and textures, paint work could be better as it has chipped away around the edges a bit but not too bad, and accuracy could be tweaked a little and as for shooting this gun fast, don't try it as you could catch a misfire, take it slow with these gas mags. Mileage is about 3 mags per 1 CO2 which is okay and has nice feel to it and nice sights. Overall a clean looking gun and fair for the price.
Was this review helpful to you?  1  0
Accuracy
Money Value
Quality
Apr 28, 2019

the gun is nice but hard to find extra mags and recently the safety got stuck on fire but the gun is not bad in the cold and the gun is accurate shouldn't be a problem to hit a person
Was this review helpful to you?  0  0
How are we doing? Give us feedback about this page.