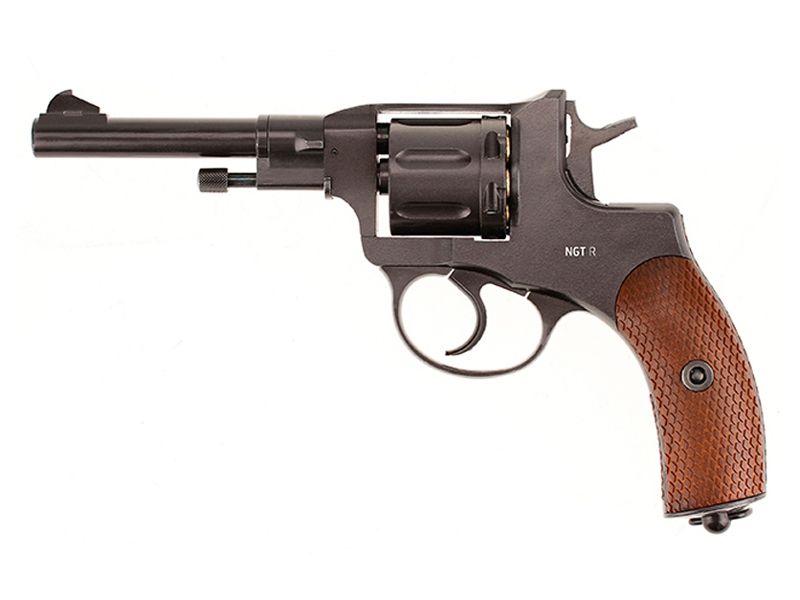 Comments: The Belgian revolver Nagant was a particularly popular model in the early twentieth century in Russia and later in the Soviet Union. It was used in both World Wars. For this reason, the Gletcher version was included in the “Russian Legends” series of air guns. This seven-shot revolver featured a unique cylinder that is reloaded one bullet at a time through a loading gate.

Type: BB Revolver. Manufacturer: Gletcher. Model: NGT Silver (Replica of Nagant M1895 Revolver). Materials: Metal & plastic. Weight: 1.54 pounds (700 grams). Barrel: 4 inches, smooth bore (Steel inner barrel). Propulsion: 12 gram CO2. Action: Revolver - single and double action. Ammunition Type: 4.5mm Steel BB's. Ammunition Capacity: 7 rounds. FPS: 361fps (110m) The Gletcher NGT Silver CO2 BB Revolver is yet another addition of shell loading revolvers like the Dan Wesson and KWC 357 based revolvers, with the exception that the Gletcher NGT is more of a blast from the past and even though it comes in at a much more compact size, it holds an additional round! Another note worthy point is the fact that Gletcher has somehow figured out a way to reduce the CO2 release valve giving the Gletcher NGT a more true to scale frame size, I am talking about the distance between the hammer and the cylinder. This allows for a more realistic and true to dimension replica which in this classic revolver is super important. Read full article here: https://www.replicaairguns.com/2014/11/15/gletcher-ngt-silver-co2-bb-revolver-table-top-review.html Buy the Silver Gletcher NGT in Canada: https://www.replicaairguns.ca/gletcher-steel-pellet-revolver-co2-4-5-mm-pellet-pistol-silver Buy the Silver Gletcher NGT in the US: https://www.replicaairguns.us/gletcher-steel-pellet-revolver-co2-4-5-mm-pellet-pistol-silver