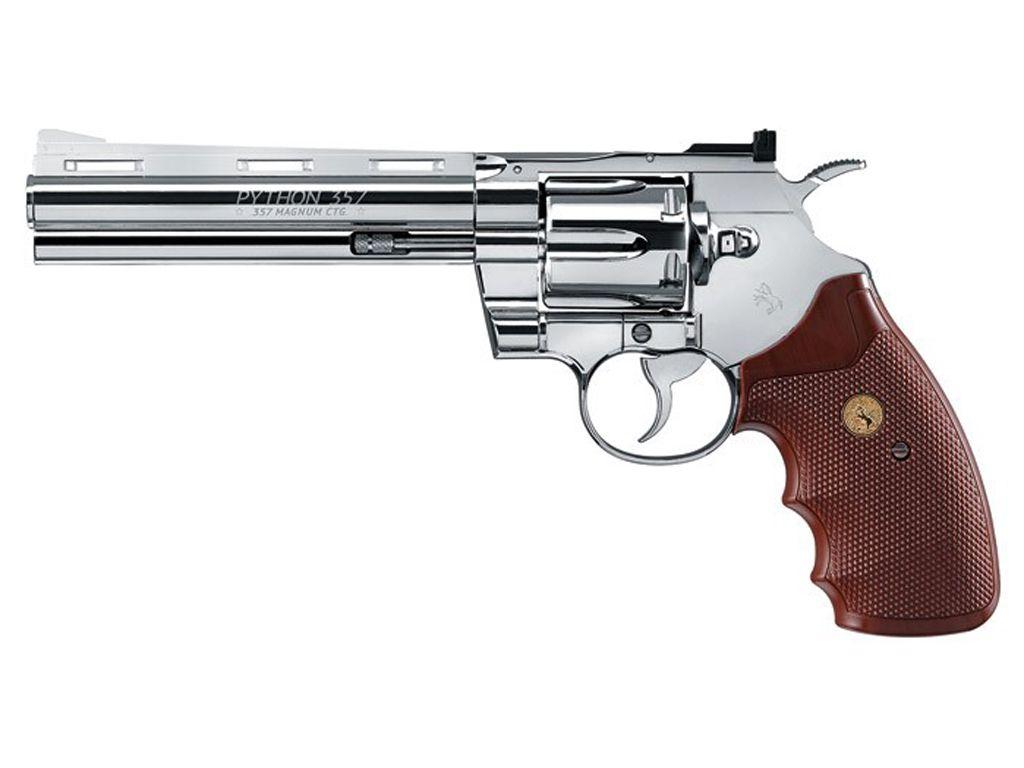 Accuracy: Based on my results shooting the Umarex Colt Python 357 which is essentially the same gun in a different finish. The results I got shooting my 6 round group from a 30 foot out semi rested position where good overall. Vertically there was about a 2 inch spread while horizontally there was about a 1 inch spread. I did find the plastic tips on the brass shells seemed to be a bit tight at first and this is when I did most of my Chronograph and target shooting. I believe the tightness effected the consistency of the FPS which also effected the accuracy especially up and down. I did get one shot out of the Umarex Colt Python 357 well over the claimed 400 fps but again the fps was rather erratic most likely because of the snug BB fit due to shell break-in.

Build Quality: The Umarex Colt Python 357 Magnum Chrome CO2 BB Revolver being mostly metal has a very good build quality and is on par with the Dan Wesson 715 shell loading revolver. It has a nice weigth adn balance to it and feels really good in the hand! The only real plastic I could find was in the grips and the shell tips. Fit and finish was also good with no noticeable chrome wear or sloppy workmanship. It will be interesting to see how the Chrome finish wears over time compared to the black finishes found on most KWC made Airguns.

Realism: TheUmarex Colt Python 357 Magnum Chrome CO2 BB Revolver overall is a close copy a the real steel Colt Python 357 styled revolver. I did notice the rear portion of the receiver (between the rear cylinder and hammer) to be a bit longer perhaps to accommodate the CO2 valve length, but other than that, this pistol is super close to the original Colt Python 357 styled revolver it is based on. Again being all metal gives this CO2 BB revolver very realistic weight and feel and the loadable brass shells make using this gun almost exactly like using a real shell loading revolver but for much less cost per shot and of course a lot less recoil on the hands and noise to be had.

Lots of detail, well made, chrome looks nice, not sure if it will wear better than the black finish found on most KWC made pistols?

Should have good overall power, accuracy and shots per CO2 (based on my previous Colt Python testing).

Nice Trigger pull in both single and double action.

Grips are a bit rough and wood grain is only OK.

Grips may be a bit large for people with small hands.

Decent enough Colt Python 357 replica but the frame is a bit long between the cylinder and the hammer.

Solid construction and beautifully built. Looks and functions like the real deal. Smooth action and accurate. I only wish there were wood grips available as an optional upgrade... I have to thank their customer service, it was amazing! FAST responses and VERY helpful!
Was this review helpful to you?  0  0
Accuracy
Money Value
Quality
Apr 06, 2020

The look and the weight is fantastic . The only con is the plastic grip. One Last thing, the price is good and the quality is premium.
Was this review helpful to you?  1  0

Comments: It’s been a while since I reviewed a Shell Loading Airgun and this one is pretty much the same Airgun I have reviewed in the past in both the KWC and Umarex Distributed forms. It has been almost 6 years since I took a look at one on my table and it still hods up today. I plan on performing another Field Test Shooting Review for the Umarex Colt Python 357 Magnum Chrome CO2 BB Revolver to see if I can replicate the same good results I did back in 2014 when I tested it out on my deck. If you’re looking for a shell loading revolver in the 357 design then for sure checkout the Umarex Colt Python 357 Magnum Chrome CO2 BB Revolver as an option.

Checkout my previous Field Test Review over on the Replica Airguns Blog:
https://www.replicaairguns.com/posts/2014/5/3/umarex-colt-python-357-bb-revolver-field-test-shooting-revie.html

Perhaps you might call this a followup video since I already made a full Field Test Shooting Video of the all black version of this pistol and you may wonder if the color of a gun could in some way effect how it performs? Well I don’t think color would really matter but it has been over 6 years since I did my original Field Test Shooting video fo the Umarex Colt Python 357 Magnum Chrome CO2 BB Revolver and so perhaps some things have changed, maybe my shooting is better or worse? At any rate let’s find out.

Also make sure to take a look at my Table top Video for the Umarex Colt Python 357 Magnum Chrome CO2 BB Revolver if you're interested in the specifications and details along with some nice tight close up video of the Airgun:
https://www.replicaairguns.com/posts/2020/9/2/umarex-colt-python-357-magnum-chrome-co2-bb-revolver-table-top-review

Buy the Umarex Colt Python 357 Magnum Chrome CO2 BB Revolver in the US:
https://www.replicaairguns.us/colt-python-357-co2-steel-bb-revolver-chrome
How are we doing? Give us feedback about this page.