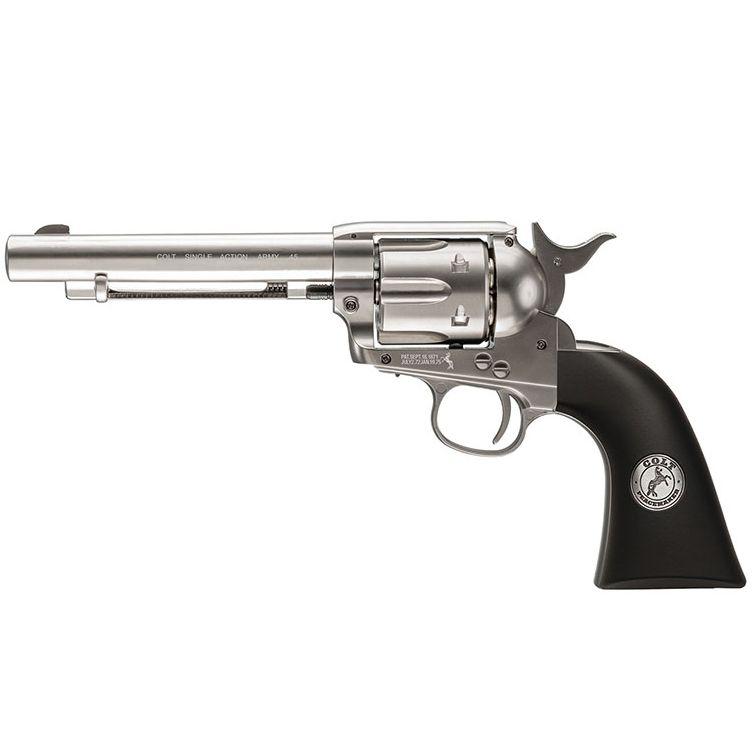 Trigger Pull: Trigger pull on the Umarex Colt Single Action Army CO2 Pellet Revolver is the best I have ever come across in an airgun. Being that the Umarex Single Action Army Revolvers are single action only, most of the work is done while you pre-cock the hammer. The trigger pull is under 2 pounds and has virtually no take up with a crisp release.

Accuracy: I performed my standard 30 foot back paper target shooting test using a semi-rested position, standing in the back with a sandbag up front to rest my hands on for stability. This position is nice and steady but not perfect so there is always some human factor to consider and I know at least one of the 6 shots went a bit high on account of me pulling that one shot just a little bit. Removing that one shot I kind of blew, I was able to get a very tight .75 inch grouping with the Umarex Colt Single Action Army CO2 Pellet Revolver. And looking back at the video my hold was a little on the jittery side, perhaps one too many espressos this morning...In my first portion of the FPS velocity test, I used my somewhat temperamental Chronograph shooting several 7 grain lead pellets using a brand new CO2. I really did not have much luck with my Chronograph today, it did not seem to like the lead pellets I was using? I went through 12 shots and only got 3 decent readings which were rather spread apart. 318, 484 and 333 FPS for an average of 378 FPS. I can say that when shooting the Umarex Colt Single Action Army CO2 Pellet Revolver the pellets do seem to get to the target pretty quickly and my gut estimate is that they are moving somewhere in the high 300 to low 400 FPS range.

Build Quality: The Umarex Colt Single Action Army Pellet Revolver has a mostly all metal construction other than the plastic grips and seals. The fit and finish is excellent with a great overall weight in the hand. The mechanical action of the hammer and trigger feels just like it would on a real Single Action Army revolver.

Realism: In terms of replicating a real steel Colt Single Action Army CO2 Pellet Revolver, Umarex has done a really great job with their CO2 pellet firing version. The CO2 is well hidden with the Allen key built into the handle so no ugly screw tab hanging down.

Comments: All I can say is we finally got our Airgun 1857 Colt Single Action Army Revolver! I have been asking the big airgun companies for this for a while and I knew it would be very popular once made available. As it turns out, not only do the "Americans" want one, but so do many folks overseas! I am really glad that time and effort was put into this version and we got such a great product that looks amazing and shoots just as good as it looks. For anyone who is interested in owning the classic cowboy six shooter, you have to make sure to get one of these super realistic Single Action historic revolvers!

Average Rating
Based on 24 rating(s)

I Purchased this Colt at the same time as the BB version. It out performs the BB model completely. In future all my revolvers will shoot pellets. It has a harder hitting round it feels so good! Most of my side arms are weathered by myself. These pistols I leave alone. I compared this one to my BB version and the Crosman 1875. Both very good revolvers. I like the darker grips. The faux ivory of the Umarex BB and the Remington 1875 just isn't convincing. I like the nickel finish I don't weather anything. These revolvers are true to their origins. Between 1850 and 1914 everything was high quality with no shirking the custom paint and plating on all machinery. Steam locomotives were a work of art as is this Handgun! This model while smaller than the Remington 1875 is in fact heavier! Its bright shiny and works like a watch. I love the cartridge loading it reminds me of shooting black powder. I will be looking for more product like this. My next purchase is going to be the Umarex model 94 Winchester they share the same cartridge. I just love 19th century subjects! That in mind..... Replica Airguns. Henry Rifle! Sharps carbine! Springfield Trap door carbine!
Was this review helpful to you?  0  0
Quality
Money Value
Accuracy
Jun 26, 2021

Peace maker or not?

I am ex-military and enjoy handling nicely make weapons...this air gun allows me to practice firing without the Canadian drama that surrounds this hobby. Replica fie arms allow a certain tactile feel without the hassle of firing the real deal. And in my experience it provides an excellent experience all the way around. Thank you Umarex and Replica for making this happen..well done.
Was this review helpful to you?  1  0
Accuracy
Money Value
Quality
Mar 02, 2021

excellent I love it

the gun is amazing and totally worth the month
Was this review helpful to you?  0  0
Quality
Money Value
Accuracy
Feb 21, 2021

Absolutely amazing craftsmanship. I love how accurate this little gun is!
Was this review helpful to you?  0  0
Accuracy
Money Value
Quality
Jan 09, 2021

This is a very good looking & feeling Revolver,I have owned several in different calibers & this one is as close as you can get to the feel of the real thing. I have gone to air weapons because of my age & health . I can fire these safely at a properly backed target & not create a lot of noise or danger to others. I have all 3 of the original old west Revolvers & love them all...
Was this review helpful to you?  0  0
Accuracy
Quality
Money Value
Dec 03, 2020

This air revolver is a must have for collectors. I love everything about this gun.
Was this review helpful to you?  0  0
Quality
Money Value
Accuracy
Sep 29, 2020

Don't know who the Umarex company is manufacturing these guns over there in Taiwan, but their doing a fine job!
Was this review helpful to you?  0  0
Accuracy
Money Value
Quality
Jul 27, 2020

Super nice handgun accurate fun just an overall Beauty five-star all the way I highly recommend this gun
Was this review helpful to you?  0  0

This Field Test Shooting Video Review focuses on the performance results of the Umarex Colt Single Action Army CO2 Pellet Revolver. I put it through its paces to see what kind of feet per second performance it can achieve using .7 grain RWS lead pellets. I also perform my standard 6 shot Revolver accuracy test from a 30 foot back semi rested shooting position to see how this classic cowboy 6 shooter groups on a paper. target

Make sure to checkout some of my other Colt Single Action Army Videos as I have done some Table Top and shooting videos for the BB shooting version of this pistol:
http://www.replicaairguns.com/posts/tag/colt-single-action-army

Buy the Colt SAA CO2 Pellet Revolver in Canada:
https://www.replicaairguns.ca/colt-peacemaker-saa-pellet-revolver-co2
How are we doing? Give us feedback about this page.