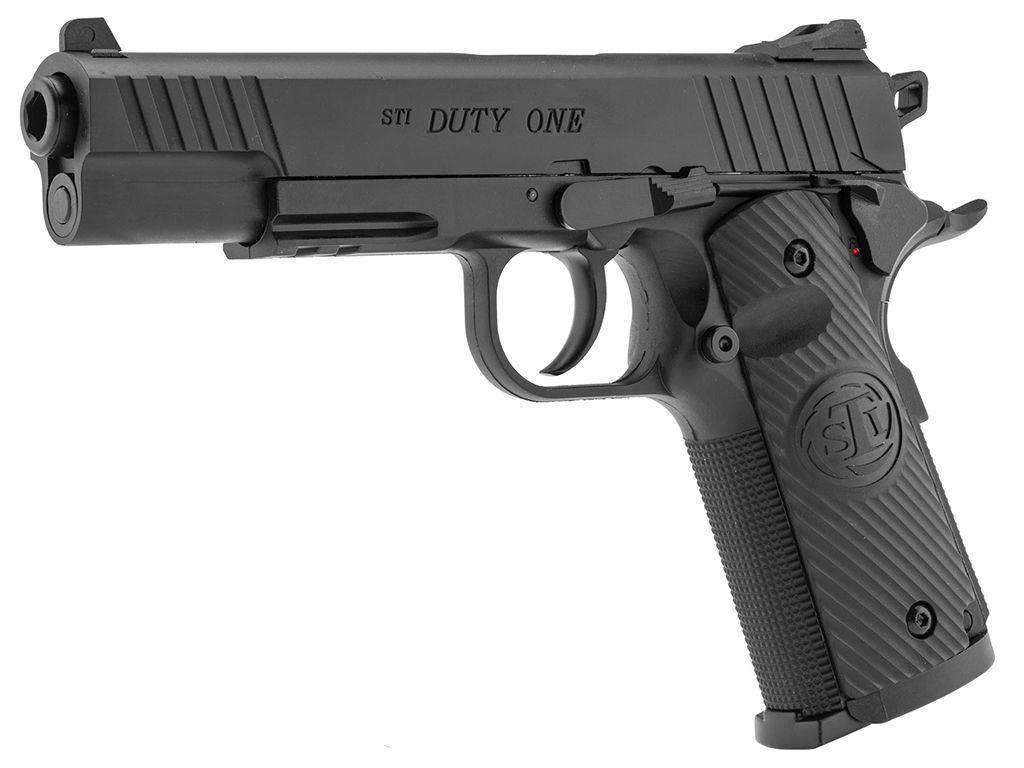 Trigger Pull: The trigger pull on the ASG STI Duty One 1911 Non Blowback is fairly light in both single and double action. Take-up is the same in both modes but when in single action mode most of the trigger pull has little to no resistance until you get to the break point near the end where the hammer is released.

Accuracy: In an earlier review I shot the Blowback version STI Duty One 1911 air gun at a target from 20 feet away in a free standing position, and it performed well getting a 1.5 to 2 inch grouping right in the center of the target. The rear sight is adjustable for windage which is always nice to have just in case you are shooting a bit to the left or right. For me there was no need to adjust the sights. My Chrony testing with an eight shot averaged result was 373 FPS - very decent for a blowback pistol! It will be interesting to see how this non-blowback version performs since there is more CO2 going to the BB and less gun movement without the blowback operation.

Build Quality: ASG did a great job designing and making the STI Duty One 1911 Non-Blowback airsoft gun, they didn't really compromise on anything other than going with a polymer frame! With that said all the important parts like the slide, slide catch, safety, mag release, hammer, barrel and magazine are all metal. The fit and finish as with all the ASG air guns is very good!

Realism: The ASG STI Duty One 1911 Non Blowback version is a close replica to the real steel STI 1911, the only real giveaway is the trigger design, as a true 1911 trigger is not your typical lever type. Even with the different type of trigger the STI Duty One is a very good replica complete with STI licensing and trademarks.

Comments: In terms of comparing the non-blowback version of the ASG STI Duty One 1911 to the blowback version without actually shooting it, they are pretty much identical except for the double and single action trigger found on the non-blowback version. Even the slide seems to work the same. The big difference will be when I shoot the Non-Blowback ASG STI Duty One. Will it shoot with a lot more FPS and will the reduced slide movement give it more accuracy? I am assuming yes to both of these questions but I guess we will all have to wait and see when I do my official Shooting Field Test Comparison...

This video is a walkthrough review of the ASG STI Duty One 1911 Non Blowback CO2 BB Pistol. I show off the gun close up from all angles and point out the metal and polymer components and the excellent quality and features this airgun offers .

Buy this gun from the Canada Replica Airguns Store:
http://www.replicaairguns.ca/asg-co2-4-5mm-sti-duty-one-air-pistol.html

Buy the Blowback version from the US Replica Airguns Store:
http://www.replicaairguns.com/buy-air-blank-guns-us/#ecwid:category=2215359&mode=product&product=9316632

Check out the full review on my website at:
http://www.replicaairguns.com/posts/2014/9/27/asg-sti-duty-one-1911-non-blowback-co2-bb-gun-table-top-revi.html
How are we doing? Give us feedback about this page.