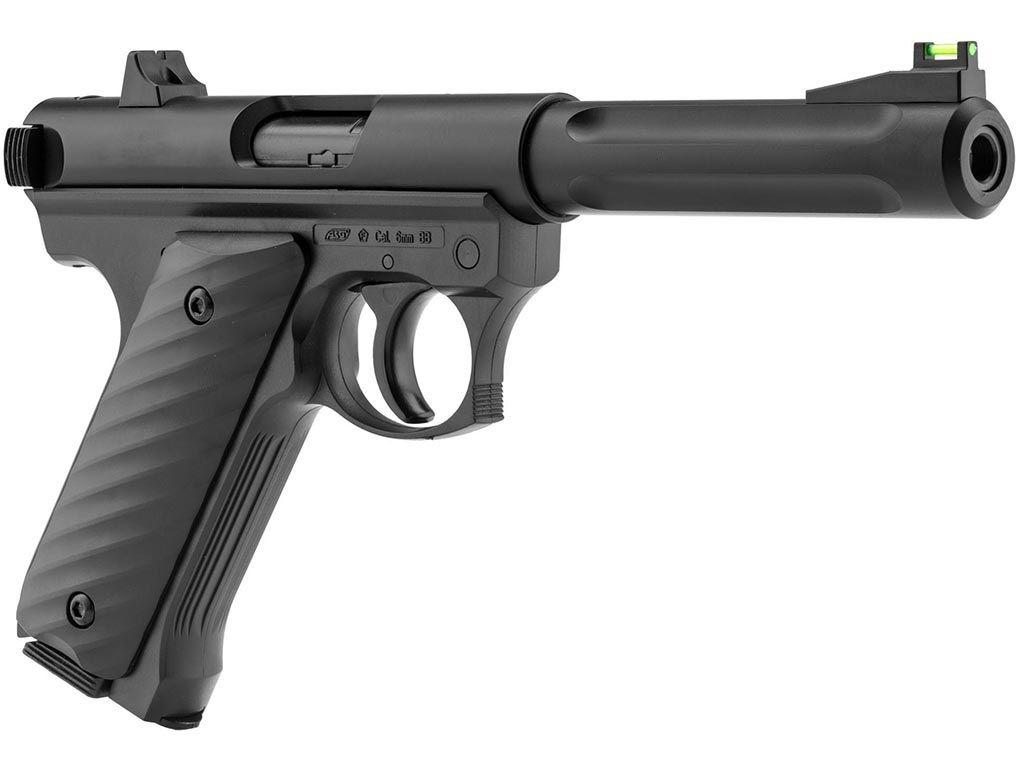 Trigger Pull: The trigger pull on the ASG MK II is double action only which will make it a bit on the heavier and longer side when compared to a real steel Ruger MK II. It is smooth however and does have a nice satisfying click that sounds like a firing pin being released. The unfortunate part is that the real steel version is a single action only trigger and one that is super short and light so the contrast between the airsoft and 22LR version may make this gun not practical as an optional training tool if you win the 22LR version also.

Accuracy: This part of the review is yet to be determined as I have not done my Field Test or Shooting tests for this pistol. I will put a link in here when I have done my official Field Shooting Test. For now all I can go on is some feedback from others that have claimed very high FPS and excellent accuracy. I am looking forward to finding out for myself! You can watch my Ruger MK I Gas version Field Test Shooting Review to get an idea on how the ASG Ruger MK II version might perform.

Build Quality: ASG as usual has distributed a quality gun, the fit and finish on the ASG Ruger MK II Black CO2 Airsoft Pistol is very good and there is use of metal where it needs to be like with the internal mechanical parts, the trigger, the safety, rear fully adjustable sight and the full size drop-out metal magazine that holds the CO2 and the airsoft BBs. The MK II version has a metal upper which adds additional weight over the MK I's plastic upper.

Realism: The ASG MK II is based on real steel Ruger MK II with the fluted barrel and looks very close to a real Ruger MK II. There is no blowback operation or bolt operation so that means that only a double action trigger is possible, this is a bit unfortunate since the real Ruger Mark II has an absolutely smooth and light single action trigger. On the positive side you can field strip the ASG Ruger MK II Black CO2 Airsoft Pistol just like the real version.

Comments: Compared to my previous review of the ASG Ruger MK I, the MK II for me is a big improvement. The metal upper barrel assembly makes all the difference in terms of weight and feel. I also prefer using CO2 for the increased performance of higher FPS and less cool down effect over a gas system. I am hoping my Field Test Shooting video goes well and the ASG Ruger MK II Black CO2 Airsoft Pistol performs on point for me.

I purchased this weapon and out of the box the trigger and firing was wonky. It requires you to push the trigger back into position in order to fire after every shot or you pull the trigger and nothing happens. This faulty trigger and firing is my only real anger. The shots you do manage to get off seem very accurate and strong, and the feel of the gun is incredible. It feels good quality and sounds nice too, although a little quiet. For the price I'd say its overpriced. It's a good feeling gun, but the trigger and firing are a massive draw back. Perhaps mine is just faulty but it seems bad since it was brand new. Anyways I'd recommend it for people looking for a nice feeling gun, but wouldn't recommend it for people who actually would like to use it.
Was this review helpful to you?  0  0

Make sure to also check out my Table Top Review for this Airsoft Pistol for more information on features, specifications and high quality photos taken by yours truly! If your interested in the ASG Ruger MK1 then you can find my review for it here. In this Field Test Shooting Reviews I test out the ASG Ruger MK II CO2 6mm Airsoft Pistol and put five rounds through my Chronograph to find out what the average fps is using .20 gram BB's and a brand new 12 gram CO2 cartridge. ASG claims 417 fps, I was expecting to get pretty close to that but did average a little bit lower at right around 399 but it was only about 7 degrees Celsius or 45 degrees Fahrenheit. Kind of a cold one! Read full article here: https://www.replicaairguns.com/2016/11/23/asg-ruger-mk-ii-dual Buy the ASG Ruger MK II CO2 Airsfot Pistol in Canada: https://www.replicaairguns.ca/asg-mk-ii-dual-tone-co2-airsoft-pistol