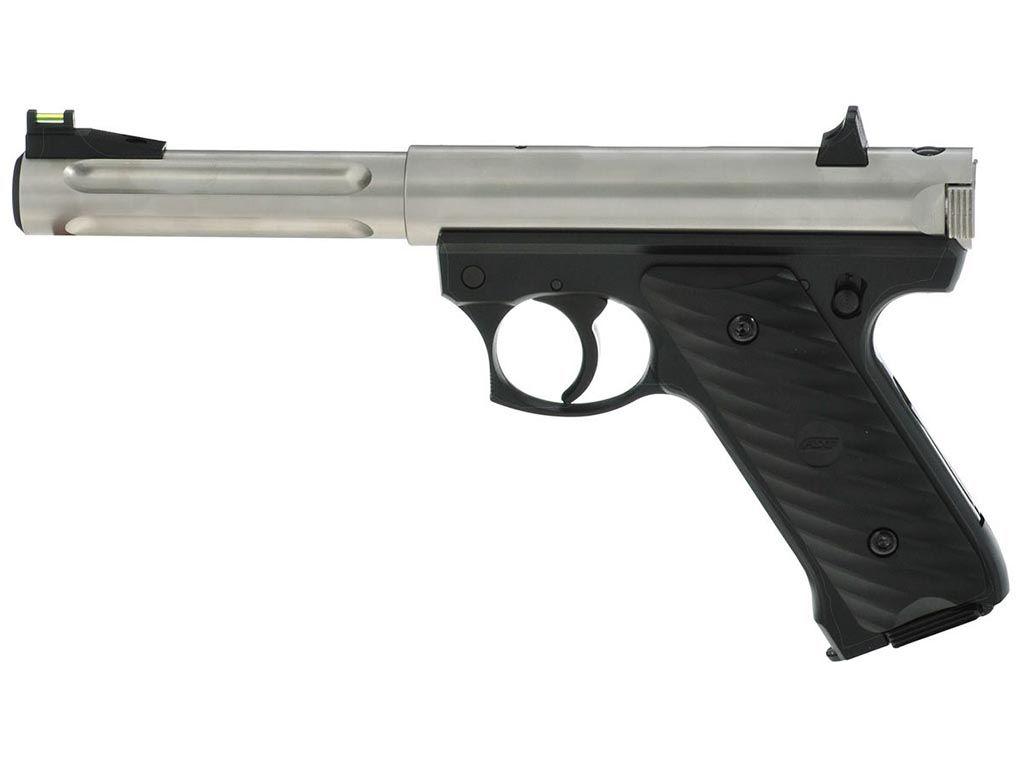 Trigger Pull: The trigger pull on the ASG Ruger MK II CO2 6mm Airsoft Pistol is double action only and kind of on the long side but it is pretty smooth and has a nice satisfying metallic click to it when released, I found it pretty easy to shoot but it does take some practice time to get the feel for it. The unfortunate part is that the real steel version is a single action only trigger and one that is super short and light so the contract between the airsoft and 22LR version may make this un not practical is an optional training tool.

Accuracy: I shot the ASG Ruger MK 2 CO2 6mm Airsoft Pistol from a 30 foot range since I hadn't had a chance to shoot it yet. While shooting from a semi-rested position at 30 feet back, I was able to get a 5 inch, 10 shot group but did notice that the bulk of the shots seemed to hit within a 2 inch group with two outliers that shot a bit low and to the right. The other 8 shots all hit really close to dead center on the target. All the ASG Ruger MK pistols have adjustable hop-ups and a rear sight that is adjustable for windage so you should be able to dial this gun in for your shooting style.

I tested out the ASG Ruger MK II CO2 6mm Airsoft Pistol and put five rounds through my Chronograph to find out what the average FPS is using .20 gram BBs and a brand new 12 gram CO2 cartridge. ASG claims 417 FPS, and I was expecting to get pretty close to that. I averaged a little bit lower at right around 399 but it was only about 7 degrees Celsius (45 degrees Fahrenheit). Kind of a cold one!

Build Quality: ASG normally distributes quality guns, and this one is no exception. The fit and finish is very good and there is use of metal where it needs to be like with the internal mechanical parts, the trigger, the safety, the rear fully adjustable sight and the full size drop out metal magazine that holds the gas and the airsoft BBs.

Realism: The ASG MK II is based on a combination of the Ruger MK I-III. It looks mostly like the Mark III since the barrel is fairly stout but it does not have the typical taper near the charging handle area. Still it resembles a Ruger 22LR pistol very much. There is no blowback or charging handle operation so that means that only a double action trigger is possible. This is a bit unfortunate since the real Ruger Mark III has an absolutely smooth and light single action trigger.

Comments: If you are a Ruger MK series 22LR shooter than you may just want to get your hands on one of these and have the freedom of being able to shoot it just about anywhere for even cheaper than using 22LR ammo! I really wish it had a single action trigger, but for a double action trigger it feels pretty good and I love the sounds of the internal hammer dropping. The fully adjustable sights mean that if this gun performs well in terms of accuracy then being able to dial it in to the bulls-eye will make it that much more enjoyable to shoot. Overall I like this pistol, the ergonomics are exactly like the real Ruger Mark III and even though much of the external build is plastic, it still has a good weight to it due to the all metal magazine and other internal metal parts.

I was leery about not having elevation adjustment on the sights as I always strive for a perfect sight inI was actually shocked with this airsoft. It was dead accurate out of the box, it shoots hot and straight and feels great. Overal, this is one of my favourite airsoft. It may be too powerful for cqb but it shreds the hell out of cans
Was this review helpful to you?  1  0
Quality
Money Value
Accuracy
Apr 02, 2016

this gun is everything you wanted in the mk1 lugar and now your getting it it a solid gun full metal upper which is a huge help from the all plastic lugar mk1 the lower is still plastic and so is the trigger but that fine the gun out performs its green gas counter part in almost everyway the only thing it needs is an extended mag for more rounds the gun shoots in the 420's in fps i was so excited and happy when i got the pistol in i had to do an unboxing video which is linked in the bottom. I highly recomend this pistol my current airsoft field allows guns shooting up to 496 and it has rules on distance and such... https://www.youtube.com/watch?v=QExvbe7oOhc
Was this review helpful to you?  0  0

In this preview Update YouTube Video I take a quick look at the following ASG Airsoft and BB Guns...

This video is a walkthrough review of the ASG "Ruger" MK II Non-blowback CO2 Airsoft Pistol. I show off this airgun close up from all angles and point out the metal and plastic components and also the features and benefits of this Airsoft pistol. There is no actual shooting or testing of this pistol but I will be doing a follow up Filed Test Shooting Review shortly!

Compared to the my previous review of the ASG Ruger MK I, the MK II for me is a big improvement. The metal upper barrel assembly makes all the difference in terms of weight and feel and with the two-tone look it is for sure a very attractive looking pistol. I also prefer using CO2 for the increased performance of higher fps and less cool down effect over a gas system. I am hopping my Field test Shooting video goes well and the ASG Ruger MK II Dual Tone CO2 6mm Airsoft Pistol performs on point for me.

Check out my Table Top Review of this pistol with high resolutions photos on my website at:
http://www.replicaairguns.com/posts/2015/7/3/asg-ruger-mk-ii-dual-tone-co2-6mm-airsoft-pistol-table-top-r.html

I test the ASG Ruger MK 2 CO2 6mm Airsoft Pistol out using my Chronograph to see what the real world FPS for each airgun is. I also head back 30 feet out and shoot 10 shots to see what kind of accuracy I can expect form this CO2 Air Pistol both.

If you are a Ruger 22LR shooter than you may just want to get your hands on one of these and have the freedom of being able to shoot it just about anywhere!

Check out my Table Top Review of this Airsoft Pistol with high resolutions photos on my website at:
http://www.replicaairguns.com/posts/2015/7/3/asg-ruger-mk-ii-dual-tone-co2-6mm-airsoft-pistol-table-top-r.html
How are we doing? Give us feedback about this page.