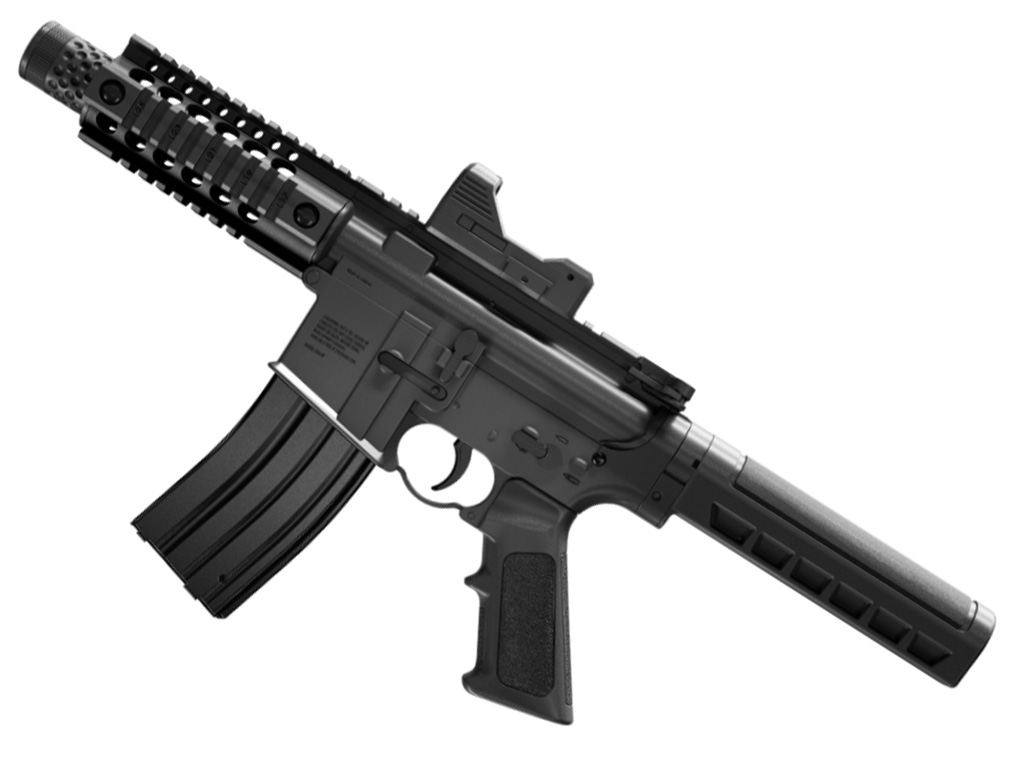 Trigger Pull: The trigger pull on the Crosman A4-P CO2 Blowback BB Rifle is single action only since the charging handle must be cocked first before you can shoot it. The trigger is short and fairly light as you would expect from an AR type trigger action. The real fun happens with the Crosman A4-P CO2 Blowback BB Gun when you switch it over to full auto mode and with just one pull and hold of the trigger you empty the 25 round magazine in mere seconds. You may want to pickup the Crosman High Capacity magazine if you plan on doing a lot fo full auto shooting!

Accuracy: A test out of the Crosman R1 CO2 Blowback BB Gun using my Chronograph where an average of 385 fps and a nice 30 foot grouping of right around 1 inch in semi out and a decently tight full auto group of about 3-4 inches. We should expect about the same with the Crosman A4-P CO2 Blowback BB Gun as long as not being able to shoulder it is a big factor?

Build Quality: The Crosman A4-P CO2 Gun is well made all around just like the rest of the Crosman AR series of BB Guns. Weighing in at 5.3 pounds without any add on accessories it feel solid and well built. There is a lot of metal going on inside and out of this rifle but keep in mind the top and bottom receiver are plastic with metal parts where they need to be like in the internals, pretty much all the working parts are metal, the magazine is full metal, the buffer tub is metal, charging handle, selector switch, magazine release, bolt release, trigger and of course the barrel is metal.

Realism: The Crosman A4-P-CO2 Blowback BB Gun is about as real as you are going to get in a CO2 Blowback AR/M4 styled Airgun. You can even take it apart and split the top and bottom receivers like the real steal version. The blowback action gives you some recoil but more importantly offers a true single action trigger and of course the full auto ability we all love. Almost all the working parts work like they would on a real AR / M4 other than the forward assist which is moulded into the receiver. Keep in mind this is the pistol version but like other AR styled “Pistols” the buffer tube area is still required to make the action work.

da best airsoft gun i got rn
Was this review helpful to you?  0  0

www.replicaairguns.com In this years 2022 Full Auto Fun Video series I take three Full auto Airguns outside in the yard and have some fun with them shooting at water filled cans and a gel target. I picked two Full Auto CO2 4.5mm Steel BB Guns from Crosman, the A4-P AR-15 Pistol and the AK1 Rifle which is a modernized AK 47. The Crosman A4-P representing my most compact entry with the Crosman AK1 representing my mid size entry even though it is fairly large. I end this series with the Air Ordnance SMG .22 which is a PCP powered Full Auto .22 Caliber Pellet Machine Gun and yes this represents my large or at least most powerful choice for this years 2022 Full Auto Fun Video. In this video, (Video 1 of the series) I have some Full Auto Fun with the Crosman A4-P, watch and enjoy along with me as I place 100 rounds down range ripping up some water filled cans and putting holes in my gel target. Buy the Crosman A4-P CO2 Cull Auto BB Gun in Canada: https://www.replicaairguns.ca/a4-p-full-auto-bb-rifle Buy the Crosman A4-P CO2 Cull Auto BB Gun in the US: https://www.replicaairguns.us/a4-p-full-auto-bb-rifle